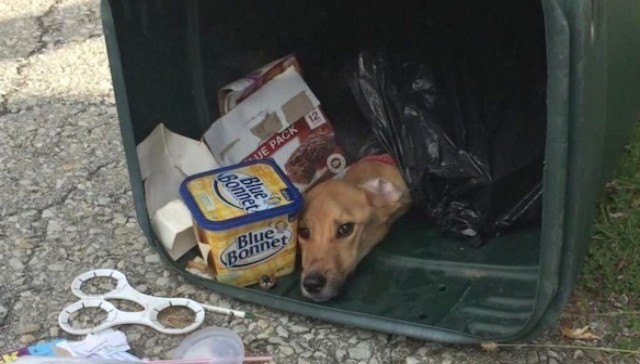 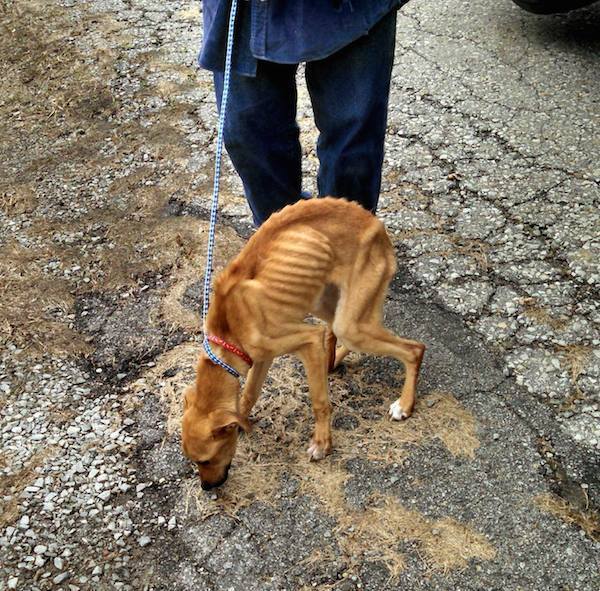 the commission of this crime the defendant Nicole L BAKER did torture her pet, a brown female dog named Mia by depriving her without food for approx, six weeks and then placing her in a garbage can outside the defendant’s residence at 112 Yellow Pine Ln, Hempfield Twp to dispose of the canines body.

On 10/30/14 I interviewed humane officer Jan DILLON who related that she had responded to a call at 112 Yellow Pine Ln, Hempfield Twp in regards to an emaciated dog found in a garbage can. DILLON spoke to the owner of the canine Nicole L (MIO) BAKER. BAKER related to DILLON that her dog ran away approx. a week ago and she did not report it stolen but she did look around the trailer park for it.

On 10/31/14 I interviewed Advanced Disposal employee Nathan BINNIE who related that he was picking up the trash at 112 Yellow Pine Ln when he removed a bag of garbage off the top of a trash can and observed the head of a dog sticking out of a trash bag. BINNIE also related that he called his supervisor who contacted the Humane Officer.

On 11/01/14 I interviewed BAKER’S relative Katelynn BRAWDY who related that she had heard about the dog that was found in the garbage can and texted the following message to BAKER on 10/30/14 at 5:08 PM “They found your dog in the garbage can”. BAKER replied “I heard”. BRAWDY then texted “Did you do that? I would have helped you find a home”. Baker then replied “Yeah I am a bad person”.

On 11/04/14 I interviewed defendant Nicole BAKER who related that she began starving her dog Mia approx six weeks prior to her leaving for Texas. Baker then stated that on 10/27/14 she walked her dog Mia out to the curb and placed her in a black garbage bag. BAKER then placed Mia in a garbage can approx thirty minutes prior to her leaving the residence. BAKER also stated that the dog was in the garbage can for about three days prior to being discovered. BAKER stated that her daughter who was listed as a co-owner on the adoption application was not aware that she had used her name and never notified her of such .

Article by Ross Guidotti– The Humane Society of Westmoreland County is currently caring for a dog that was left in a garbage can by its owner, who then allegedly moved out of state. According to officials, the dog was found in a garbage can in the 100-block of Yellow Pine Lane in New Stanton Thursday morning.A sanitation worker, Nathan Binnis of Somerset County, took the lid off of the can and saw the 5-year-old dog. He took the dog out of the can, fed it his lunch and called the Humane Society. “The garbage company called us,” said Jan Dillon, of the Humane Society. “They were dumping garbage and they noticed one of the bags moved.” The dog was extremely malnourished – weighing just 17 pounds. It is supposed to weigh about 50 pounds.

The dog had a microchip, so the owner has been identified. However, she allegedly moved to Texas. The chip identifies the primary owner as Nicole Baker. She lived in the trailer were the dog was discovered in the garbage can. The secondary owner is identified as Brittney Booker. She lives next door. Baker allegedly moved out Monday. KDKA’s Ross Guidotti knocked on Booker’s residence. There was someone home; however, they didn’t answer the door. The Humane Society is hoping to talk to both Baker and Booker as the investigation continues. Nathan Binnie, an employee of Advanced Disposal, speaks to media outside the office of East Huntingdon District Judge Charles Moore on Wednesday, Jan. 21, 2015. Binnie found a dog in a trash can on his route in New Stanton on Oct. 30. — Brian F. Henry | Trib Total Media

Brian F. Henry | Trib Total Media
Nicole L. Baker, 50, of Hempfield, arrives at the office of East Huntingdon District Judge Charles Moore on Wednesday, Jan. 21, 2015.
Hempfield woman accused of starving puppy admitted to probationary program
By Bob Stiles Staff Reporter
Wednesday, Jan. 21, 2015, 2:24 p.m.
A Hempfield woman accused of starving a female puppy and dumping her into the trash reached an agreement with prosecutors Wednesday that calls for her to be placed on a probationary program for first-time offenders.

Nicole L. Baker, 50, will serve probation and do 50 hours of community service as part of her terms on the Accelerated Rehabilitative Disposition program, according to her attorney, Chris Huffman.

She will have to pay fines, make restitution and stay out of trouble, Huffman said.

Baker had been scheduled to appear before East Huntingdon District Judge Charles Moore on charges of animal cruelty and disorderly conduct filed by state police.

“I think she realizes that and is sorry,” Huffman said of Baker’s alleged cruelty in not feeding the dog. “The good thing is, the dog’s OK.”

Baker did not say why she allegedly left the dog without food or dumped her in a trash bag, Huffman said.

After reaching her agreement, Baker ran to a waiting vehicle, away from media.

The Westmoreland Humane Society took in the dog and nursed her back to health.

“The humane society did a wonderful job bringing her back to health,” Huffman said. “(Baker) regrets what happened … and hopefully nothing like this happens again in her life and she can move on from here.”

Acceptance into ARD does not require an admission of guilt. When they successfully complete the program, participants can petition the court to expunge their criminal records.

The dog, later named Fawna for her light tan coat, was discovered by garbage truck driver Nathan Binnie on his route in New Stanton on Oct. 30. The puppy’s head was sticking out of a garbage bag at a Yellow Pine Lane residence.

The collie mix, about nine months old at the time, was emaciated, with her ribs, spine and hip bones all visible. She weighed 17 pounds. Authorities estimated the animal had not been fed for about six weeks.

Megan Fritz, a veterinarian technician with the Humane Society, first fostered Fawna back to health, then adopted her. Fawna is about a year old.

Fritz said she hopes Baker learns from her time on the probationary program.

“If it’s something that’s going to improve her as a person, then I truly hopes it works,” Fritz said.

Terri Wolfinger of Youngwood, an animal rescuer, went to the hearing and said afterward she would like to see tougher laws enacted for animal abuse.

“I think they have to get the laws changed in Pennsylvania,” she said.

Bob Stiles is a staff writer for Trib Total Media. He can be reached at 724-836-6622 or bstiles@tribweb.com