Police experts are scrutinizing details of the video from a spy camera showing a maid torturing a baby in Naalya, a Kampala suburb.

The video showing Jolly Tumuhirwe pounding the baby has since touched off a huge public outcry, with many calling for a speedy trial for the suspect on charges of attempted murder.

Reports that the baby had passed on were later dismissed as untrue by family members.

Kampala Metropolitan police spokesperson, Patrick Onyango said Police have received “very many telephone calls and messages from people expressing anger, others finding out whether, we have done something on the alleged torture of baby bythe maid.”

He explained that the “case was registered at Kiira Road Police station, investigated and the suspect a one Jolly Tumuhirwe aged 22 years was arrested and arraigned in Nakawa court on November 20, 2014, under the Anti-Torture Act, Section 3, which carries a maximum penalty of 15 years in jail.”

Onyango added: “However, we are going to amend the charge with the consent of the DPP to Attempted Murder.”

Tumuhirwe was remanded to Luzira Prison till December 8 when she will appear in court again. Source: Michael Ntezza

Udated and More information about the family and the incident:

UGANDA – Following reports that the two-year old baby seen in a video being tortured by a maid has passed on, we went down to work. And our investigations led us to the identity of the maid, her victim and her master. 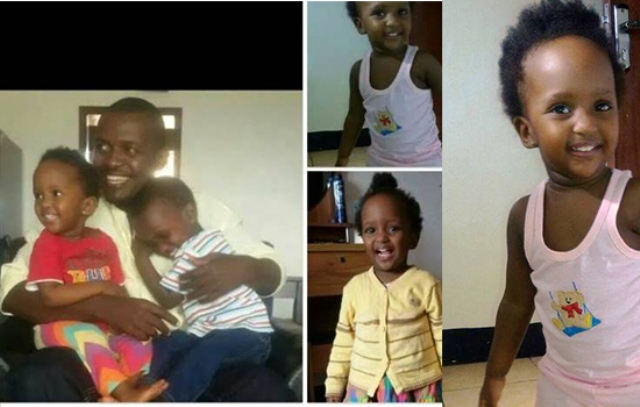 Kamanzi (L) and his kids. Right is the tortured baby

The two year-old is seen terribly tortured by a maid we have ably identified as Jolly Tumuhiirwe, 22, a born of Rukungiri District. We have also identified the toddler’s father as Erick Kamanzi, a loaded staff at a reputable NGO in Kampala who released the video yesterday mid-morning.

The video captured by interior security cameras early last week at Kamanziâ’s home of Naalya, reveals a breath-taking story where Tumuhiirwe is trying to feed the baby. The baby, whom we have established was sick at the time, exhibits difficulty in coping with the rough and speedy rate at which Tumuhiirwe fed her.

Tumuhiirwe then turns to the porridge and started eating it. But the tot could not contain the stuffed food down her throat. She threw up dreadfully. This invited Tumuhiirwe’s wrath. She landed a hot slap on the kid before throwing her off the sofa, her face kissing the floor. She remained there for a few seconds before Tumuhiirwe followed.

Using a rechargeable torch, she clobbered her severely. Not done, she started kicking her and stepping on her back in turns. She finally gave her the last kick which sent her silent and unable to move. Tumuhiirwe then picked the baby like by one hand and vanished in the next room.

According to family sources, Kamanzi last week came home and found some bruises on the baby’s hind. He did not ask what happened but he hastily went to review the cameras which, he had taken long to monitor. This was last Saturday November 15th 2014.

What he saw is what we have relayed above and uploaded on the video herein. Raged to the marrow, Kamanzi bounced on Tumuhiirwe and clobbered her to pulp. Done with it, he turned to tend to the baby as Tumuhiirwe ran to police where, she reported an assault case against her Master Kamanzi.

The Kiwatule police swung into action, raided Kamanziâ’s home anRaged to the marrow, Kamanzi bounced on Tumuhiirwe and clobbered her to pulp. Done with it, he turned to tend to the baby as Tumuhiirwe ran to police where, she reported an assault case against her Master Kamanzi.d arrested him. He promptly confessed to the charge before he was dragged to cells. After cooling down, Kamanzi asked the Cops to look at what made him clobber the maid. A mere look at the video changed the copsstance and released Kamanzi. Â

Speaking to the investigator today, police chief spokesman CP Fred Enanga confirmed that Tumuhiirweâ’s case had been taken over by the events. Reading the file number as CRB 1346/14 of Kiira Road, Enanga said Tumuhiirwe was yesterday charged under Anti-torture Act at Nakawa Court.

But Enanga hastily adds that police are contemplating on revising the charge and upgrade it to attempted murder. He said the Tumuhiirwe will re-appear in Court on December 8th 2014. Efforts to get hints on the baby’s mother were futile as family sources maintained silence on the question.

******UPDATE****** DEC 13, 2014*****
A Ugandan maid pleaded guilty on Monday to torturing a baby in a case that shocked the country after a graphic video of her abusing the child was made public.

The 22-year-old maid, Jolly Tumuhiirwe, faces up to 15 years in prison for the assault, which the local press branded “spine-chilling”.

Worried parents, who installed a hidden camera to film when they were at work, were shocked to see the footage showing the maid throwing the 18-month-old baby girl to the floor.

She then kicked the child’s face and stomach before putting her entire weight on the girl’s back, and then dragged her out of the room, apparently unconscious. She also smashed the child on the head with a torch.

The baby, named in Ugandan media as Arnella, was left bruised and shaken by the abuse.

The video has been seen or shared hundreds of thousands of times on social media.

After her arrest, police said Tumuhiirwe would be charged with attempted murder, but in court in the Ugandan capital Kampala on Monday, she faced torture charges alone.

State prosecutor Joyce Tushabe said the maid, who had no lawyer, “was remorseful” in court.

– ‘Inflicting pain without regard’ –

She appeared smartly dressed in a floral shirt, coming face to face in court with the baby’s father Eric Kamanzi, who reportedly broke down as she apologised for her actions.

“She said she was sorry for the act,” Tushabe said.

“She asked for forgiveness from the parents of the child, the nation, and those she said were affected by her acts.”

Tumuhiirwe was remanded in custody and will be sentenced on Wednesday.

UN children’s agency chief in Uganda has condemned the abuse.

“The video of this baby being beaten is shocking,” UNICEF head Aida Girma said. “Any such act of abuse and violence against children is completely unacceptable.”

The case has gathered wide attention in Uganda, where many middle class parents hire maids to look after their children.

Maids in Uganda are often poorly paid, and regularly live in the houses where they work.

While the assault shocked the nation, some commentators said the abuse reflected wider issues of hidden violence in Ugandan society.

“Even at schools, children get beaten for very little -– not getting a question right, not having hair combed, or nails cleaned,” a comment piece in the country’s Observer newspaper read.

“Ugandan children grow up numbed to pain, and end up inflicting pain without regard.”

The case has prompted the country’s Human Rights Commission to call on the labour ministry to draw up regulations for domestic workers.