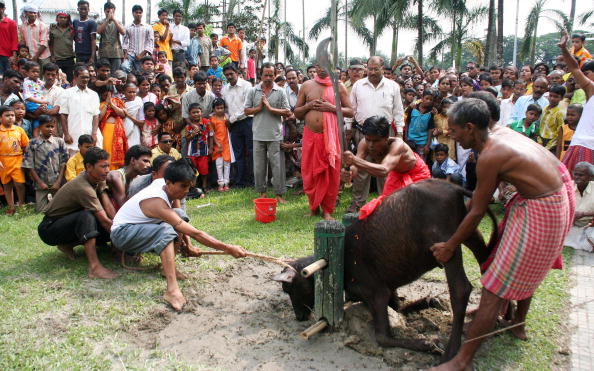 Indian Hindu devotees watch as a buffalo is beheaded by Hindu priests at a Durga temple in Cooch Behar town some 175 km from Siliguri, 19 October 2007 on the occasion of the Durga Puja festival. The sacrifice of live animals is performed to appease the goddess Durga and to shower blessings on the community, despite protests from animal rights groups. Durga, who represents the infinite power of the universe and is a symbol of female dynamism, along with other Hindu gods are worshipped by Hindu devotees for four days, during Durga Puja, one of the biggest Hindu festivals celebrated across India. AFP PHOTO/Diptendu DUTTA (Photo credit should read DIPTENDU DUTTA/AFP/Getty Images)