CHRIS CHRISTIE A HACK FOR THE MEAT AND DAIRY INDUSTRIAL COMPLEX  100% HE IS BEING PAID OFF BY THEM! POS

Big Fat Idiot Chris Christie can blow $300K of New Jersey’s money on food & booze, but VETO’S vegetarian school lunches for the NJ Schools because it will cost too much.

GRILLED: Chris Christie’s state-paid grocery bills shrank after Barbara Walters asked if he was too heavy to be president

Chris Christie’s expense account tells a story of appetite and ambition, one that pits government waste versus the New Jersey governor’s waistline.

Christie spent $360,000 from his state allowance during his five years in office. More than 80 percent of that money, or $300,000, was used to buy food, alcohol and desserts, according to a New Jersey Watchdog analysis of records released by the governor’s office.

In addition to his $175,000 a year salary, the governor receives $95,000 a year in expense advances, paid quarterly by the state. In the state budget [2], it is listed as “an allowance of funds not otherwise appropriated and used for official receptions on behalf of the state, the operation of an official residence, for other expenses.”

While Christie returns surplus funds to the state each year, Treasury officials say he does not submit receipts or accounting for the public monies he spends. The governor’s ledger [3], obtained from Christie under the Open Public Records Act, offers a rare, if partial glimpse of a controversial expense account shrouded in secrecy.

Christie’s most notable spending spree occurred during the 2010 and 2011 NFL football seasons at MetLife Stadium, where the New York’s Giants and Jets play their home games. New Jersey’s governor traditionally enjoys free use of luxury boxes for games and other events at the government-owned venue, but food and beverages cost extra.

On 58 occasions, Christie used a debit card to pay a total of $82,594 to Delaware North Sportservice [4], which operates the concessions at MetLife. The governor’s office did not provide any receipts, business reasons or names of individuals entertained, but defended the expense.

“The official nature and business purpose of the event remains the case regardless of whether the event is at the State House, Drumthwacket or a sporting venue,” said Christie’s press secretary Kevin Roberts in a prepared statement.

To avoid a potential scandal that could embarrass their rising political star, the New Jersey Republican State Committee reimbursed the Treasury [5] in March 2012 for Christie’s purchases from “DNS Sports.”  Since then, the governor has refrained from using his expense account at MetLife and other sports venues.

Meanwhile, Christie found other ways to enjoy the allowance.

The governor used it to buy $102,495 worth of groceries and alcoholic beverages from retail stores. It’s not clear from records whether the goods stocked the pantries and filled the refrigerators atDrumthwacket, the governor’s official mansion in Princeton [6], or the Mendham house where Christie and his family live. The store addresses were not disclosed.

Christie did most of his serious food shopping at Wegmans Food Markets, where he spent $76,373 during 53 shopping runs.  He patronized ShopRite supermarkets 51 times for $11,971 in purchases – plus another $6,536 in seven visits to ShopRite’s liquor stores.

Those grocery bills dropped dramatically in early 2013, shortly after Barbara Walters asked on network television whether Christie was too overweight to be president.

“There are people who say that couldn’t be president because you’re so heavy,” said Walters in an ABC special that aired in December 2012. “What do you say to that?”

Two months later, the governor underwent Lap-Band surgery in an attempt to lose weight.  Nearly two years after the operation to restrict the size of his stomach, Christie boasted he had shed 85 pounds.

On top of those food bills, Christie spent another $109,133 to hire caterers for official state receptions and special events – expenses more consistent with the stated purpose of the allowance. His favorite vendor was Jacques Exclusive Caterers of Middletown, which received $74,161 worth of business from the governor.

Other payments included $35,027 for tents and rental equipment, $10,786 for printing and office supplies and $4,338 for candy, cookies and confections.

The records released by the governor’s office did not include receipts or descriptions of what was purchased. Such secrecy would change under a bill introduced by Assemblymen Troy Singleton, D-Burlington, and Vince Mazzeo, D-Atlantic.

“New Jersey taxpayers have every right to know where their hard-earned money goes,” said Mazzeo. “Any governor who makes a responsible and appropriate use of this expense account should have no objection to complying with what’s required under this bill.”

If enacted, A-4424 [7] would require the governor to disclose expenses with receipts in an annual report to be posted on the State Ethics Commission web site.

“There is a growing sense of cynicism in politics today and it is imperative for those of us in public office to overcome that cynicism by ensuring a more transparent and accountable system,” added Singleton.

As Christie’s out-of-state travel increased while he pursued his political ambitions, the governor’s state allowance expenditures decreased. During those political journeys, many of the costs have been picked by the state GOP, the Republican Governors Association and his PAC, Leadership Matters for America.

However, the rising costs of protecting the governor on his sojourns away from New Jersey dwarfed any decreases in allowance expenditures by Christie.

The governor’s office has not responded to New Jersey Watchdog’s questions about the expenses. Instead, Roberts pointed to his previous statement: “These are the same standards and practices that every other former governor followed when it comes to their security detail.”

Over the past five years, $975,000 of those security costs were charged to American Express credit cards issued to the governor’s office. Christie has flatly refused to release the monthly statements, claiming details of past expenditures could jeopardize his safety in the future.

New Jersey Watchdog is suing Christie in Mercer County Superior Court [10] to force the governor to release the Amex records of EPU charges.

[2] In the state budget: http://watchdog.wpengine.netdna-cdn.com/wp-content/blogs.dir/1/files/2015/04/Gov-budget.pdf

[8] according to records he provided: https://watchdog.org/wp-content/blogs.dir/1/files/2015/05/CC-allowance-refunds.pdf

What is it: Gov. Chris Christie yesterday vetoed a bill — approved overwhelmingly in both the Senate and Assembly — that would have required middle schools and high schools to create advisory committees to help develop alternate menus for school lunch, including options for vegetarian or vegan students.

What it means: The final bill in itself was a compromise measure to provide, at minimum, for an advisory committee to seek student input, and it had widespread and bipartisan support. That apparently wasn’t enough, although Christie stressed he wasn’t against the intent, just the means.

What Christie said: “While school districts should endeavor to provide nutritious meal options that their students prefer, the bill would unnecessarily burden hundreds of school districts in New Jersey. The burden includes the creation, distribution, and review of food surveys to every student enrolled in a middle school or high school and the formation of an eleven-member food advisory committee if even one student in the entire district expresses any displeasure.”

Sponsor’s intent: The bill was spearheaded by state Assemblywoman Pamela Lampitt (D-Camden), who said one of her friend’s daughters had faced ridicule in her school lunch line when asking for vegan meals.

“We are seeing more and more students who are growing up vegan or vegetarian,” Lampitt told NJ Spotlight last fall. “We are just asking schools to look at the menus and how to adapt them for these children.”

Personal experience: In her day job, Lampitt oversees food services for the University of Pennsylvania.

Not universally backed: As it traveled through the Assembly, the bill drew the scrutiny of school district lobbyists and advocates who questioned whether the requirements were too onerous.

Passed overwhelmingly: The bill still passed the Assembly 58-16, and the Senate 34-5. The Legislature’s leadership gave no indication yesterday as to whether it would seek an override.

Final word, for now: “In light of the many challenges school districts already encounter in order to provide an education worthy of our children’s future, I cannot support the additional costs and burdens this bill would impose,” Christie wrote in his veto. BUT HE CAN SPEND 300K ON FOOD AND BOOZE FOR HIS SPORTS PARTY???

AND LET’S NOT FORGET WHAT THIS POS DID LAST YEAR 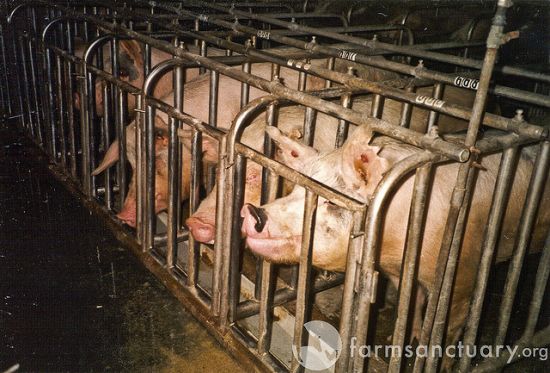 The New Jersey Republican’s opponents are accusing him of vetoing the bill due to his presidential aspirations.

Pork industry groups — most prominently the Iowa-based National Pork Producers Council — opposed the bill. Democrats are saying Christie’s veto was made with an eye to Iowa’s primary voters.

His veto was “not unexpected, that’s for sure,” Democratic state Sen. Ray Lesniak told the Daily Beast, who said Cristie’s “decisions are purely political.”

Gestation crates are so narrow that pregnant sows cannot turn around. 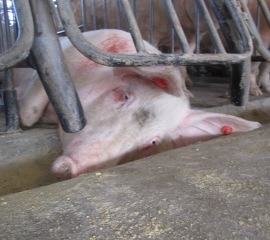 They are used to improve feeding efficiency and prevent anti-social behavior during pregnancy. Critics say they are cruel to the animals.

Christie, who vetoed similar legislation in 2013, noted the lack of widespread gestation crate use in New Jersey, and told lawmakers to “using their lawmaking authority to play politics with issues that don’t exist in our State.”

“I will rely on our in-state experts rather than the partisan politicians who sponsor this bill,” Christie said. “These facts are no less true today.” 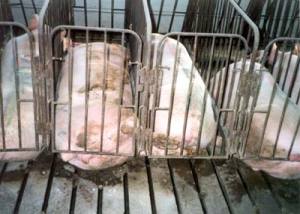 New Jersey Gov. Chris Christie struck another blow to animals on Thursday when he vetoed a bill that would have encouraged public school cafeterias to offer vegetarian options.

The bill, which passed the state’s assembly and senate by a significant margin, advised schools to take students’ cultural preferences into account when planning menus, and to provide options such as vegetarian and vegan meals.

In his veto letter, Christie noted that the bill would require schools to launch advisory committees if students complained about cafeteria offerings, saying it was an undue burden on already stressed public schools. 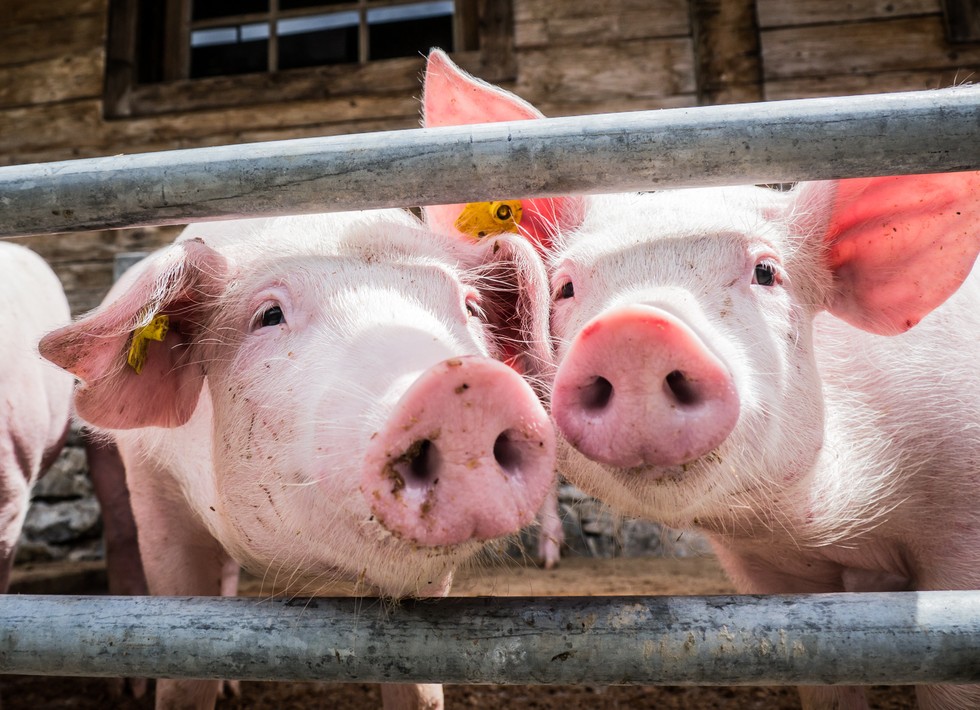 However, Christie’s veto upset some animal advocates, who have condemned his support of the midwestern meat industry in the past.

Last year, Christie came under fire when he vetoed a bill banning the use of cruel gestation crates by New Jersey pig farmers. Like the school lunch bill, the gestation crate measure had significant bipartisan backing — 93 percent of New Jersey voters supported it.

But while New Jersey farmers rarely use gestation crates, they’re standard protocol for Iowa’s massive pig factory farms. And with a 2016 presidential run a real possibility, many accused Christie of vetoing the popular bill to appeal to Iowa’s massive meat lobby and swing state voters instead of the people he was elected to govern.

Assemblywoman Pamela Lampitt (D-Cherry Hill), who sponsored the school lunch bill, told the Cherry Hill Courier-Post that she was “flabbergasted” by Christie’s decision.

1 thought on “CHRIS CHRISTIE IS A MONSTER”