:::::Caitlyn Update:::
Someone posted this on Craigslist: Father Vincent Maroun from St. Benedict Catholic Church visits Caitlyn to pray and bless her as she heals from abuse in Mount Pleasant on Tuesday.

NORTH CHARLESTON (AP) – Surgery on Caitlyn, the South Carolina dog who was severely injured after her muzzle was taped shut, took a little longer than expected, but the surgeon is optimistic about her recovery.

A spokeswoman says Caitlyn had her lip and cheek reconstructed but only lost minimal function of her tongue.

Caitlyn, a stray 15-month-old chocolate Staffordshire mix, showed up at a home last Wednesday with her mouth tightly bound with black electrical tape.

He remains in Charleston County Jail.

A South Carolina made has been arrested on animal cruelty charges after police said he taped the mouth of his dog shut with electrical tape. The dog, a 15-month-old chocolate Staffordshire named Caitlyn, was found last week by neighbors, according to the Post and Courier of Charleston. 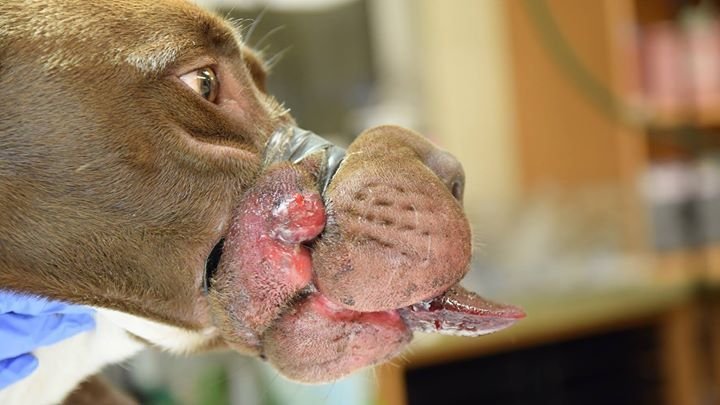 Here’s what you need to know:

1. Caitlyn’s Tongue Was Trapped Between Her Teeth, Possibly for Days

Caitlyn was found by a neighbor with her muzzle taped shut after being stuck with her tongue stuck between her teeth for as long as two days, according to the Charleston Animal Society. The dog had last been seen on Memorial Day by neighbors, and turned up early Wednesday morning on the Good Samaritan’s doorstep, the animal society said.

The black electrical tape was tightly wound around Caitlyn’s muzzle. “The tape was so tight, that Caitlyn’s tongue was caught between her teeth, stopping blood flow to her tongue,” the animal society said in a Facebook post.

“Caitlyn is in a lot of pain, her condition is critical, and her prognosis is guarded,” said Charleston Animal Society Senior Director of Veterinary Care, Dr. Lucy Fuller, after the dog was found. “A large part of her tongue may need to be removed surgically if the tissue dies from the lack of blood flow. She may be severely disfigured, or the large amount of dead tissue may cause life-threatening complications.”

Caitlyn was taken to a specialty veterinarian for treatment as her story spread nationwide.

“This is the most malicious case of animal abuse I have seen in my entire career,” said Aldwin Roman, the Charleston Animal Society’s Director of Anti-Cruelty & Outreach, in a statement. “to leave this dog in pain, unable to eat or drink and to now leave her in the position where her life is at stake because she may lose her tongue is heartbreaking.”

2. Dodson Was Free on Bond on Gun & Drug Charges

Dodson was free on $100,000 bond in an unrelated at the time of his arrest, according to Charleston County court records. He was arrested March 10 and charged with possession of cocaine and unlawful carrying of a pistol.

“We are supportive of the NCPD’s investigation and hope justice will be served in this case. We are eager for whomever committed this crime to be held accountable and punished to the fullest extent of the law, which continues to be one of the nation’s weakest,” the Charleston Animal Society said in a statement on Dodson’s arrest.

3. He Was Ordered to Give-Up Another Dog He Owns

[wpvideo 8BaPJg51]
After setting Dodson’s bond in the animal cruelty case at $50,000, a judge also ordered that Dodson give up another dog that he owns, which was still in his home, according to the Post and Courier.

4. Caitlyn Is Recovering With a Local Animal Society

Caitlyn is continuing to recover with a local animal society after receiving several treatments. She will undergo surgery next week to repair her face and tongue.

“She’s had three full meals. She’s been able to (take in food) and swallow it,” Kelli Klein, the director at Veterinary Specialty Care, told WDTN.

Caitlyn continues to recover from her ordeal, but she is still hospitalized. She has graduated from intravenous fluids and antibiotics to normal food and oral medications. She continues to receive hyperbaric treatments to improve the health of the damaged tissue in her mouth and cold laser therapy to promote healing. She underwent a small surgical procedure on her lip yesterday, but there is not currently a procedure planned for her tongue. We are still waiting to see how well her body will heal on its own.
We have the greatest of hopes for this beautiful girl!

5. The Dog’s Treatment Is Being Paid for by a Local Charity

Caitlyn’s care is being paid for by a local charity fund set-up by the Charleston Animal Society, called Toby’s Fund.

“Toby is a beautiful golden retriever mix who came to us suffering from chemical burns over a large portion of his body. Despite his dire condition, our medical team could see the fight in his eyes and proceeded with weeks of intense treatment,” the animal society says on its website. “He bounced back stronger than ever and Toby was quickly adopted by a new loving family. His story inspired all of us at the shelter, just like so many of the other animals that now benefit from our fund named in his honor.”

Donations can be made to Toby’s Fund here. WHOEVER DID THIS MAY YOU GET HIT BY A FAST MOVING BUS!

+++++UPDATE+++++
BUT FIRST; MY OPINION
I’m going to go out on a limb here and predict that this “former owner” is the gigantic POS that taped Caitlyn’s mouth shut and then made up an assinine lie that the dog tore up his apartment and out of fear of being evicted sold his dog to some stranger for 10 dollars. and then suddenly she reappears? SERIOUSLY?

source ABCNews
The people who once cared for Caitlyn, the dog found with her muzzle taped shut in North Charleston this week, say they contacted Animal Control and gave them information on the man who bought their dog two days before she was found injured and abused.

According to the couple, the 15-month-old chocolate Staffordshire terrier mix, who was originally named Diamond, was a rambunctious puppy who caused damage in their home. The owners tell ABC News 4 they were afraid they might be evicted and decided they could not give Caitlyn the attention and training she needed.

A man saw Caitlyn and offered to buy her. The couple says they were in such dire straits that they sold her for $10 on Memorial Day. They say it’s one of the biggest mistakes they ever made.
On Wednesday morning, before he left for work, the former owner said he went outside and found the dog had returned to his home. He asked his neighbor to call 911.

The resident called the Charleston County 911 dispatch center and painted a picture of a struggling and distressed puppy that had her muzzle taped shut. The dog’s tongue was caught between her teeth.

“I have a dog that’s here at my house that I found and the dog’s mouth is taped shut with electrical tape, tongue hanging out its mouth, bleeding, and his tongue is completely black,” the 911 caller said. “I just don’t know what to do.”

Officials said they think the dog was stuck in that painful condition for as many as 48 hours before she was handed off to officials at Charleston Animal Society for care.

The former owner said he never thought this could happen.

The couple says it gave Animal Control the description of the man when contacted by them this week because Caitlyn left the couple’s home on Monday in good health and on Wednesday she was found bleeding and with her mouth taped shut.

By Friday afternoon, Caitlyn was moved into a hyperbaric chamber at Mount Pleasant Veterinary Care Specialists for treatment in the hopes that she would be able to keep her tongue.

“This was intentional,” said Dr. Kelli Klein. “Someone was trying to hurt her and they did it. They did what they went out to do. Just thankfully someone intervened so she didn’t die.”

Officials said her condition was improving greatly since being in the care of the animal hospital, adding she was beginning to want food and water again. She was even picking up her dog bowl on her own and chewing on rawhide. When she was first taken in, officials at Charleston Animal Society said she was not interested in food or water which was making her condition worse.

“I’m making it sound like she’s doing so great, and she is, but these are serious, serious injuries,” Klein said. “She still has a long way to go. Regardless of whether there are surgeries or not surgeries she will be in recovery for months before she is deemed normal.”

National attention to Caitlyn’s abuse has led to a reward of up to $6,000 for information leading to the identification and arrest of the people responsible. The Humane Society of the United States is contributing $5,000 of that amount.

“Caitlyn is a friendly dog who may have suffered for days and is now fighting for her life. Anyone capable of such a heartless act of cruelty should be held accountable, and we hope this reward will encourage anyone with information to come forward,” said Kimberly Kelly, the South Carolina state director for The HSUS.

The Charleston Animal Society already announced a $1,000 reward for information leading to the arrest of the person responsible.

Animal Society officials said the North Charleston Animal Control is investigating the case. If convicted of ill treatment of an animal, the suspects could face up to five years in prison and a $5,000 fine.

“This is the most malicious case of animal abuse I have seen in my entire career,” said Charleston Animal Society Director of Anti-Cruelty & Outreach Aldwin Roman, “To leave this dog in pain, unable to eat or drink and to now leave her in the position where her life is at stake because she may lose her tongue is heartbreaking.”

To help the Animal Society save Caitlyn and others like her, please give to Toby’s Fund for medical care at CharlestonAnimalSociety.org. On Thursday afternoon, the Charleston Animal Society in South Carolina, released updated information on the young, injured Staffordshire-mix dog who was found on Wednesday in the Chicora Cherokee neighborhood with electrical tape secured tightly around her muzzle. According to the shelter, the 15-month-old dog, named “Caitlyn,” is doing well, given her condition. On Friday, Caitlyn will be transferred to a specialty care center for continued treatment for her injured snout and tongue. The electrical tape was bound so tightly around her snout that the blood flow was cut off to her tongue and it is possible that the tissue may die; there is concern that the removal of her damaged tongue could lead to life-threatening complications. “This is the most malicious case of animal abuse I have seen in my entire career, to leave this dog in pain, unable to eat or drink and to now leave her in the position where her life is at stake because she may lose her tongue is heartbreaking.”

In an effort to find the person(s) responsible for Caitlyn’s dire condition, the Charleston Animal Society is offering a $1,000 reward for information leading to the arrest and conviction of her abuser.

To help the Animal Society save Caitlyn and others like her, please give to Toby’s Fund for medical care at CharlestonAnimalSociety.org