Woman ‘punishes’ cat in washing machine, gets slapped with child abuse probe
A young Russian woman got more than she’d bargained for after posting a kitty torture video involving a laundry machine. She is now facing a criminal child abuse case, as online outrage uncovered footage on her social media page of a kid beating as well.

The initial video that got the Russian internet and animal rights activists fuming was filmed by a young couple in the Urals city of Magnitogorsk earlier in April, but surfaced in the news on Monday after heated discussions on a local internet forum. The woman that turns the washing machine on, identified as 19-year-old Dinara Iskulova, posted the clip on her social media page.Iskulova and her boyfriend decided to“punish” the cat in this way because it hadn’t used its litter box. In the video, as the machine starts to rotate, the terrified animal cries, frantically trying to keep the drum in place. The couple, meanwhile, jokes about the cat’s panic before letting the poor creature out.
Days after the video went viral, the woman attracted the interest of Magnitogorsk police – for a different but not entirely unrelated reason.Another video on the Iskulova’s page featured a group of young people kicking a boy rolled up in a carpet. A six or seven-year-old child can be heard screaming and crying. The boy’s 33-year-old mother also appears in the video, but does nothing to stop the beating.

“Following from the evidence uncovered in the investigation into what happened, a criminal case for torture of a minor has been opened,”the spokesperson for the office of criminal investigations for the Chelyabinsk region, told Chelyabinsk.ru website. 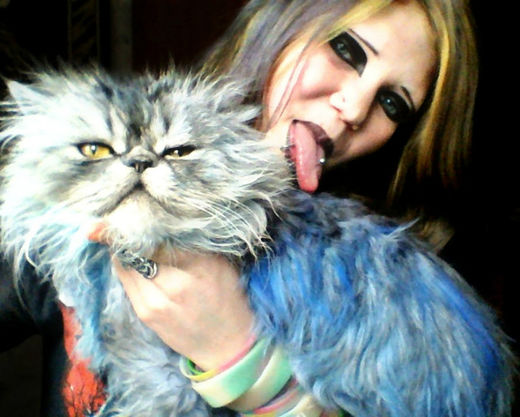 Public prosecutor Sergey Gorshkov told the website that “The identities of all the people involved have been established, as well as the locations where these flagrant acts took place. All the necessary evidence is being gathered at the moment.”

According to media reports, Iskulova and her friends have not admitted to any wrongdoing. As to the cat, they insist it was a necessary “educational” measure.

Details have emerged regarding Iskulova’s background suggesting that she grew up in a violent, drinking family, and that she had already been registered with police for an unspecified minor offence. It also became known, that her mother has recently died.

The young woman said she has received plenty of threats since the video of the cat abuse went public.

WARNING: Distressing content. The vile footage is now being investigated by police after it was shared on social media

A sick video has emerged online of the moment two cruel owners put their cat in a washing machine ‘because it wouldn’t use its litter box’.

The shocking clip shows a male and female putting the helpless animal into the machine – before unbelievably switching it on.

As the machine starts, the cat appears distressed, which quickly turns to sheer panic as the water begins to fill up.

The couple are heard laughing off camera as the washing machine’s drum starts to rotate, spinning the cat violently at one stage.

They then ignore the terrified animal’s loud cries, as it desperately tries to keep its head out of the water.

The helpless cat even tries to paw at the glass in the hope of making an escape.

Eventually, the couple turn off the machine and open the door – allowing the frightened animal to jump out and run to safety.

The clip has been circulating on social media sites as well as LiveLeak.com, where it is claimed that the owners put the cat in the machine because it refused to use a litter tray.

Police in the city of Magnitogorsk, Russia, where it is thought the footage was recorded, have been aware of the vile video and are investigating, according to Interfax news agency.

5 thoughts on “MONSTERS IN Magnitogorsk, Russia, DO YOU KNOW WHO THESE VILE BEINGS ARE?”