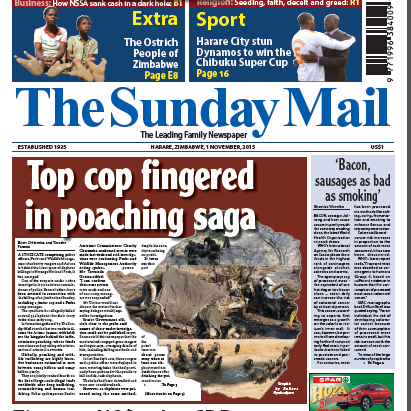 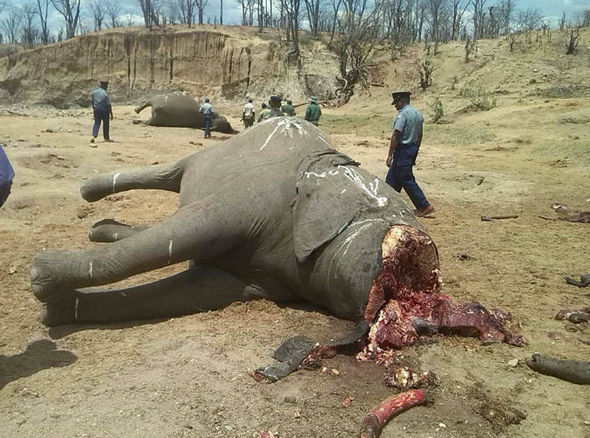 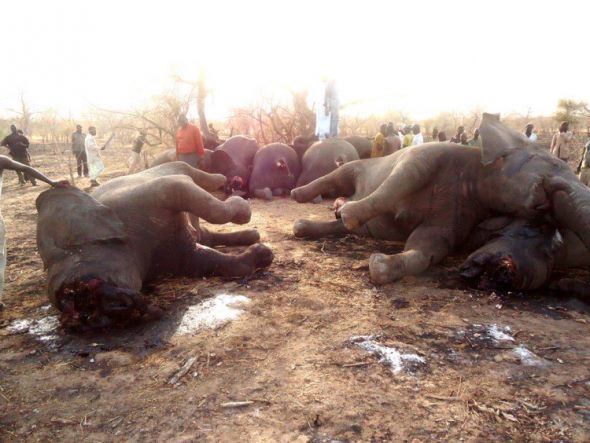 THE massacre of more than 60 elephants at the same Zimbabwe park which Cecil the Lion lived took a new twist today after three journalists were arrested over claims made surrounding the poaching.

By ROB VIRTUE
PUBLISHED: 13:09, Tue, Nov 3, 2015 | UPDATED: 13:23, Tue, Nov 3, 2015
The elephants were poisoned with cyanide before the beheadings
An editor and two reporters working at a state-owned newspaper are accused of saying police were behind the horror killings.

The report, made in the latest edition of the Sunday Mail in Zimbabwe, said an unnamed police[currently seeking their names please email me or post or comment on this post if you have them]commissioner and a junior officer were responsible for the brutal slayings at Hwange national park.

It said they worked with rangers for the parks agency and an Asian businessman in a poaching syndicate.

CORRUPT Police responded by arresting the journalists on Monday on charges of publishing or communicating false statements.

THE LYING Ms Charamba said: “The falsehoods have dented and tarnished the image of the police organisation for no apparent reason.

“The story does not only affect ZRP but the entire security apparatus.”

The journalists are expected to appear in court tomorrow to face the charges which could result in sentences of up to 20 years.

The lying Charamba said police had since August this year recovered 70 elephant tusks, 30 kg of ivory, 100 kg of cyanide and arrested eight people linked to poaching.
Charamba
Zimpapers Ltd, which owns the weekly newspaper, said it would issue a statement later today.

The story of the tragic elephants became world news last week when gruesome pictures of them with their trunks cut off were released.

Salt stones were also found laced with Cyanide poison near to the dead bodies.

Claims were originally made that park rangers were behind the attacks as they were angry over poor pay.
“So many of us believe some of the poaching at the moment is organised and executed by some rangers in parks, and we don’t know how this will be sorted out.”
The deaths took place at the same park where Cecil the Lion, shot earlier this year by US dentist Walter Palmer, lived.
Sources say more than 300 elephants were killed in suspected poisonings last year in addition to the latest horror slayings.
Cecil the lion
Mon, August 3, 2015
Cecil was a lion in Hwange National Park, Zimbabwe. He was killed on 1 July 2015, at the age of thirteen.
Albert Ebrahimzadeh
PLEASE SIGN & SHARE WIDELY THESE?26 VIP PETITIONS
PET?1 http://www.avaaz.org/en/save_the_elephants/
PET?2 http://www.bloodyivory.org/petition
PET?3 http://bit.ly/RHVnKy
PET?4 http://bit.ly/MgpuGn
PET?5 http://bit.ly/1jysfwa
PET?6 http://greatergood.me/SiWAbZ
PET?7 http://bit.ly/1nyUh2H
PET?8 http://bit.ly/RHVINc
PET?9.http://www.96elephants.org/
PET?10.http://bit.ly/1gK4HHd
PET?11.http://bit.ly/1rXvIcg
PET?12.http://bit.ly/SiGKht
PET?13.http://bit.ly/SLl2CL
PET?14.http://bit.ly/1nGRQbk
PET?15 http://bit.ly/TZfHZs
PET?16.http://bit.ly/1qNagvI
PET?17.http://bit.ly/1u6LIgx
PET?18.http://chn.ge/1ATzdWt
PET?19.http://bit.ly/1ve5Jmk
PET?20.http://bit.ly/1u6LIgx
PET?21.http://bit.ly/1v06QET
PET?22.http://bit.ly/1HMZxcT
PET?23.http://bit.ly/1goMJgN
PET?24.http://chn.ge/1EcXMob
PET?25.https://www.causes.com/ban-ivory
PET?26.http://greatergood.me/SiWAbZ
?(Picture source:Elephant carcasses from the March 14-15 massacre. Photo courtesy of SOS Elephants of Chad)
? AFRICA: CAMEROON AND CHAD
In the aftermath of the largest elephant poaching episode thus far in 2013, Central African governments met to coordinate and adopt an emergency plan to combat the killings. But is it too little, too late?
On March 14-15, at least 86 elephants were killed in Tikem, near Fianga in the Mayo Kebbi East region of southwestern Chad, close to the Cameroon border. Among the victims were more than 30 pregnant females, many of which aborted their calves when they were shot. The calves were left to die, and reportedly some were shot. It’s too sickening to even comprehend.
?Please watch this picture from Elephant calf aborted after its mother was shot in March 14-15 poaching incident ! –Here??http://newswatch.nationalgeographic.com/files/2013/03/Aborted-calves.png
The massacre occurred in the closing hours of the Convention on International Trade in Endangered Species (CITES) 16th Conference of Parties (COP16) meeting (held in Bangkok from March 3-14), where the topic of elephants was high on the agenda.

The timing was also just weeks after the discovery of 28 elephant carcasses, all stripped of their ivory tusks, in Cameroon’s Nki and Lobeke National Parks and at least 15 carcasses across four separate locations in Central African Republic.

All these incidents followed numerous reports of columns of Sudanese poachers crossing Central African Republic and heading toward Cameroon and Chad.

Both the Chad and Cameroon governments had responded to this advance notice. In December, the Chad government sent soldiers and military aircraft to patrol the region and Cameroon deployed its Rapid Intervention Battalion (BIR), a special forces military unit. But neither was able to find the poaching gangs and stop them.

“ We’ve been aware of the poachers’ presence and movements since last November in the Central African Republic, but given the means at hand, and difficulty of working in this vast, remote landscape, it has been very challenging to fully address the situation,” says Richard Ruggiero, Chief, Branch of Asia and Africa at the U.S. Fish and Wildlife Service.

? PLEASE WATCH——-?? 86 elephants killed in Chad poaching massacre 19 March 2013
Armed ivory poachers are reported to have killed 86 elephants in less than a week, including pregnant females and calves ?http://www.guardian.co.uk/environment/2013/mar/19/86-elephants-chad-poaching-massacre

? THAILAND
There are about 100,000 forest elephants remaining in the forests of central Africa, compared with about 400,000 of the slightly larger savannah elephants.
The forest elephants of Africa have lost almost two-thirds of their number in the past decade due to poaching for ivory, a landmark new study revealed on Tuesday. The research was released at an international wildlife summit in Bangkok where the eight key ivory-trading nations, including the host nation Thailand and biggest market China, have been put on notice of sweeping trade sanctions if they fail to crack down on the trade.

“The analysis confirms what conservationists have feared: the rapid trend towards extinction – potentially within the next decade – of the forest elephant,” said Samantha Strindberg of the Wildlife Conservation Society (WCS), one of 60 scientists on the research team.

There are about 100,000 forest elephants remaining in the forests of central Africa, compared with about 400,000 of the slightly larger savannah elephants. The total elephant population was over 1 million 30 years ago, but has been devastated by poaching driven by the rising demand for ivory ornaments in Asia.

Prof Lee White, head of the National Parks Service in Gabon, once home to the largest forest elephant population, said: “A rainforest without elephants is a barren place. They bring it to life, they create the trails and keep open the forest clearings other animals use; they disperse the seeds of many of the rainforest trees – elephants are forest gardeners at a vast scale.”

Forest elephants have suffered particularly badly because they range across central Africa, which has been left lawless in large areas by war, and where poachers have ready access to guns. Furthermore, the tusks of forest elephants are longer, straighter and harder than savannah elephants, making them particularly sought after. “A lot of carvers prefer forest elephant tusks,” said WCS’s vice president, Elizabeth Bennett.

Although deforestation is taking place, loss of habitat is not the principal problem for the elephants, according to another of the scientific team, John Hart of the Lukuru Foundation. “Historically, elephants ranged right across the forests of this vast region of over 2m sq km, but they now cower in just a quarter of that area. Although the forest cover remains, it is empty of elephants, demonstrating that this is not a habitat degradation issue. This is almost entirely due to poaching.”

Last month, Gabon announced the death of about 11,000 forest elephants in the Minkébé national park between 2004 and 2012. Gabon’s president, Ali Bongo Ondimba, says: “Our elephants are under siege because of an illegal international market that has driven ivory prices in the region up significantly. I call upon the international community to join us in this fight. If we do not reverse the tide fast the African elephant will be exterminated.”

The 178-nation summit of the Convention on the Trade in Endangered Species (Cites) began in Bangkok on Monday and has already seen the eight countries identified as key to the ivory trade threatened with trade sanctions if they do not tackle failures in protection against poaching in Africa and failures in seizing illegal ivory along trade routes to China. The nations, including the states which most ivory passes through – Tanzania, Kenya, Uganda, Malaysia, Philippines and Vietnam – and where most ivory is bought – China and Thailand – must come up with concrete action plans or face a ban on millions of dollars of trade in animals and plants, including crocodile skins and orchids.

The Thai prime minister opened the Cites summit by pledging to outlaw Thailand’s domestic ivory trade which is currently legal. But she was criticised for failing to set a deadline.

Proposals to the Cites summit supporting and opposing more “one-off” sales of ivory will not succeed, the Guardian has been told. A previous “one-off” sale in 2008 was criticised by some as driving up demand, but defended by others as providing funds for elephant protection.

Cutting the demand for ivory, as well as fighting poaching, is seen as crucial, with African elephant deaths running at 25,000 a year. Bennett said better education programmes in China would be a vital part of the action plans: “A lot of people don’t actually know that you have to kill elephants to get ivory.”
?SOURCE: http://www.guardian.co.uk/environment/2013/mar/05/two-thirds-forest-elephants-killed

? PLEASE WATCH ALSO THIS LINK FROM THE BIG SEIZURE IVORY :OCTOBER 22, 2012 HONG KONG — The authorities in Hong Kong have intercepted one of the largest shipments of illegal ivory in history — 1,209 elephant tusks and ivory ornaments weighing more than 8,400 pounds !!! source http://rendezvous.blogs.nytimes.com/2012/10/22/huge-seizure-of-illegal-ivory-in-hong-kong/
??AND : Published on Oct 21, 2012 by BBCWORLDNEWS26
Hong Kong customs officials say they have confiscated nearly four tonnes of smuggled ivory – their largest seizure of products from endangered species.
The haul – worth about $3.4m (£2.1m) – was hidden in two separate containers from Kenya and Tanzania.The seizure followed a tip-off from mainland Chinese police, who have since arrested seven people !??http:http://youtu.be/LN33DzI5-ys
==================================================
? PLEASE WATCH THIS VIP VIDEO & SHARE WIDELY FOR AWARENESS !!!!!!!!
This VIP video explains why it’s so critical that wildlife and forest offences have to be seen as serious transnational organized crimes. It was shown at a side-event of the ongoing 22nd session of the Commission on Crime Prevention and Criminal Justice (CCPCJ) where the heads of UNODC and CITES Secretariat were present and delivered speeches.??http://youtu.be/PB4KVtYGAek
PLEASE WATCH THE ??PICTURES FROM POACHED ELEPHANTS @ http://www.wildlife-pictures-online.com/elephant-poaching-aftermath.html
AND PLEASE WATCH ALSO THIS VIDEO??:http://youtu.be/PGznqCl3LVk
Thank You ~Tony Zadel/ Copyright(©)