By Alafair.
25-year-old Asima Khatoon, from Hyderabad India went to Saudi Arabia to work as a housemaid for Abdul Rahman Ali Mohammed: Civil ID NO. 1104103810; while in his employ she was locked up, deprived of food and water, physically beaten, mentally tortured and ultimately murdered by this man.

Abdul Rahman Ali Mohammed and the Saudi government are attempting to cover up the murder and will not return the body as then their lie that she “died from tuberculosis” will be revealed. The tuberculosis story is being disputed by Asima’s family saying she had undergone all the medical tests as required under the rules before her departure. 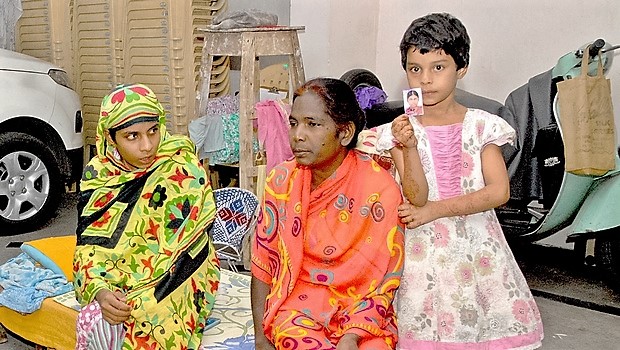 Without hearing a word from her daughter since she left for Saudi Arabia in December 2015, Asima’s mother, Ghousia Begum received a call from her daughter crying and begging to be rescued from the torture she was being subjected to.

“If you can’t get me out of here now, when will you do that? After my death?” was the last words of Ashima to her mother last month. Fifteen days later, she died.

The call was verified by phone records was made from the employers daughters cell phone [Sri Abdul Rahman Ali Mohammed ] mobile number 00966595664616,  Asima seized the opportunity to use the phone to call for help.

After the phone call, Ghousia contacted the police but very little was done. Inspector G Ramesh, of Rein Bazar police called the broker [slave broker] a woman named Muskaan and her husband Jahangir, that arranged the job for Asima, and she had promised to bring Asima back. Muskaan and husband Jahangir have since disappeared without a trace.

Ghousia feels her daughter could have been alive today, if Indian authorities had acted in time. She stated “I approached the police station in March but they took no action against a woman and others who had sent my daughter abroad,”

MBT leader, Amjadullah Khan Khalid, who through contacts in Riyadh, obtained pictures and videos of Asima’s dead body and the injury marks were clear, indicating that she was tortured.

Ghousia Begum wrote a letter to the Indian ambassador in Riyadh, requesting for an investigation into the cause of the death and for arrangements to send the body back to Hyderabad. “I want justice. The people both here and in Riyadh responsible for my daughter’s death should get the punishment,” she said 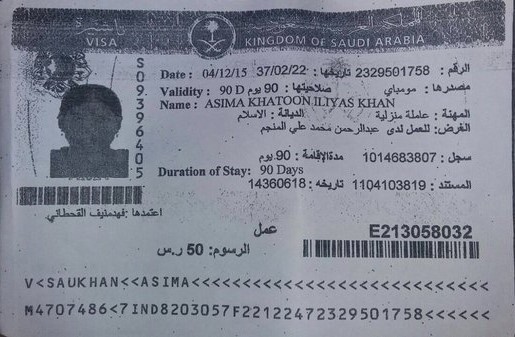 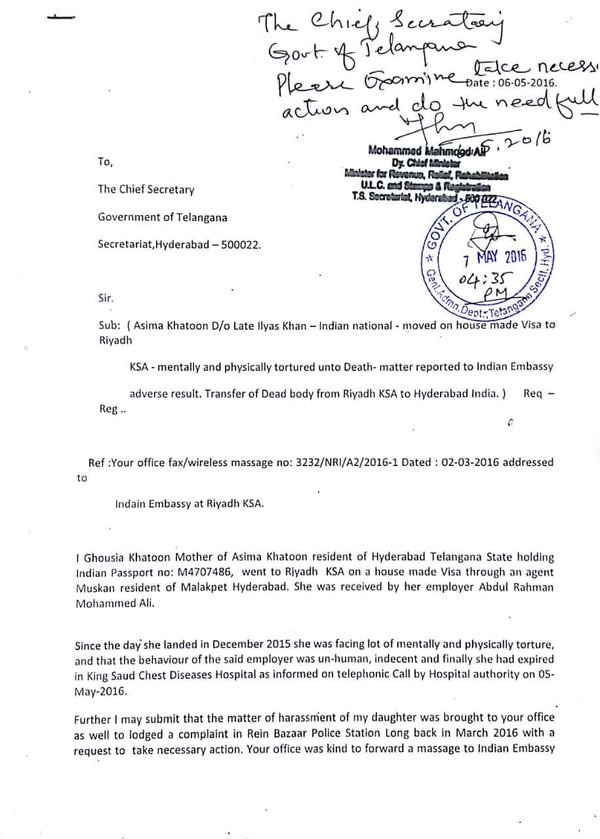 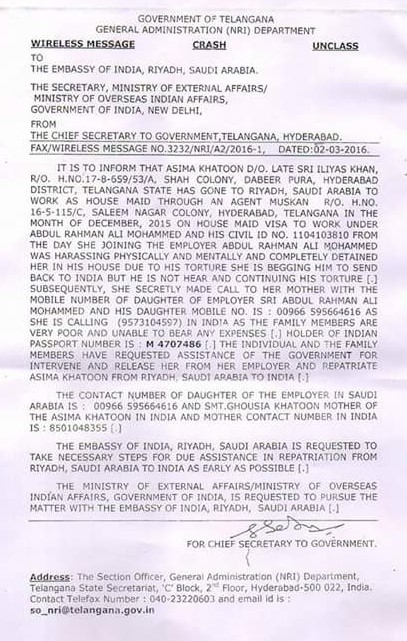 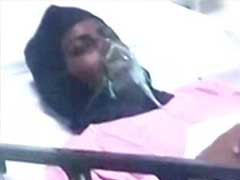