A Virginia woman has been convicted of animal cruelty after she decapitated roosters in her home as part of a Santeria ritual sacrifice.

Mercy Carrion, 43, a Santeria priestess from Loudoun County, declared in court on Wednesday that the charges against her violated her First Amendment right to freedom of religion.

Prosecutor Alexandra Hazel set the matter of Carrion’s religion aside, arguing that she had the right to sacrifice the roosters, but said she broke the law by failing to care for the birds beforehand and then slaughtered them in an inhumane way, reported the Loudoun Times Mirror.

Mercy Carrion greeted the officers who arrived at her Loudoun County home in April to investigate a report of animal cruelty in a blood-soaked white shirt, according to testimony at her trial Wednesday. 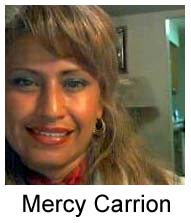 Blood was smeared around the doorway of the home, a large knife was found next to the kitchen sink, and the decapitated bodies of two roosters were discovered in a filing cabinet, officers told a judge.

Despite the grisly scene, Carrion, 43, of Sterling, Va., argued in Loudoun County Court on Wednesday that the animal cruelty charges brought against her violated her First Amendment right to freedom of religion. She is a priestess in the Afro-Caribbean religion of Santeria, whose practitioners sometimes offer animal sacrifices.“I tried to explain to [the officer] you offered the bodies of the animals to the saints,” Carrion told the court through a Spanish interpreter. “There are elders in my church, and I was instructed to do this.” 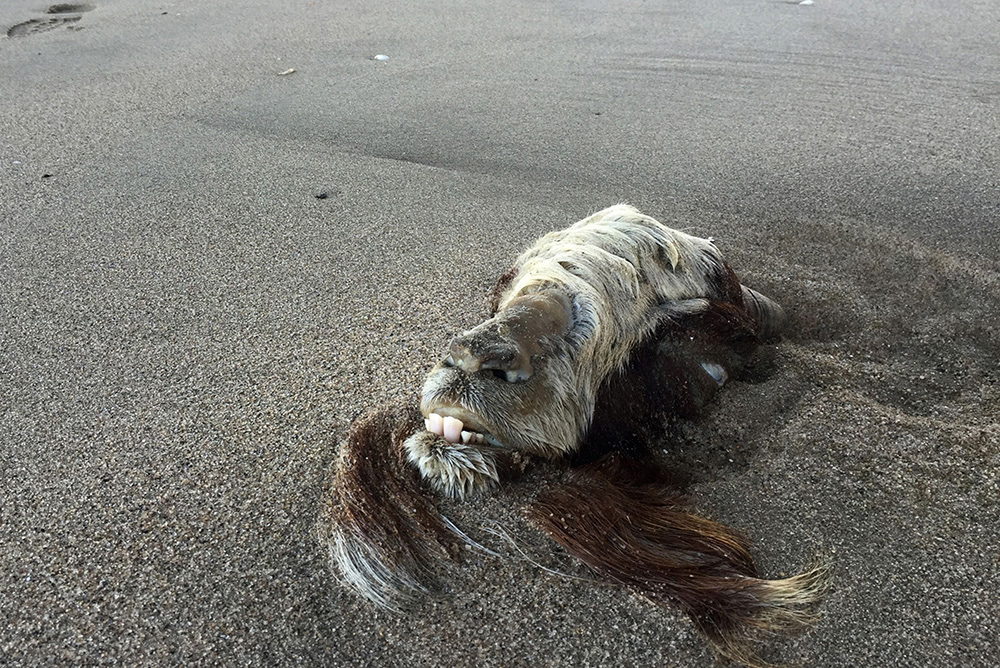 A Loudoun County prosecutor sidestepped the religious issue, arguing that Carrion could sacrifice the birds, but she flouted Virginia law by failing to care for them beforehand and then slaughtering them in an inhumane way.

“She has a right to practice her religion,” Assistant Commonwealth’s Attorney Alexandra Hazel said in her closing argument. “She deprived these animals of food, water and shelter and then cruelly killed them.” 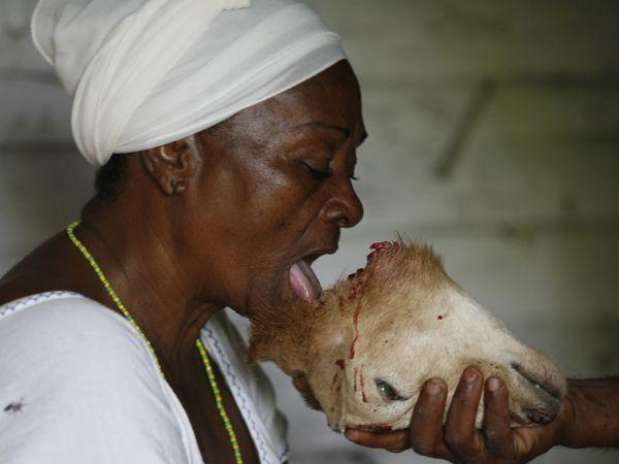 A judge ultimately sided with the prosecutor, convicting Carrion of three misdemeanor counts of animal cruelty, but not before an unusual trial played out that featured testimony about a rooster autopsy, or necropsy, and an expert on religions of the African diaspora.

Loudoun County animal control officers testified that they were called to Carrion’s home on April 25 for a report of animal cruelty. They found three roosters in feces- and urine-soaked beer boxes in Carrion’s basement. One officer said the birds could not properly move in the boxes.

Officers returned the next day at 1 a.m. to serve a search warrant on Carrion’s home and found her in the bloody shirt. Carrion testified that she killed the birds just before officers knocked on her door because she wanted to follow through on the sacrifice.

Santeria is a religion that combines elements of Catholicism, West African religious beliefs and the traditions of the indigenous people of the Americas. It is often practiced by the descendants of slaves brought to the Americas.

The officers testified that they found no evidence of food for the roosters in the house and that Carrion told them that the roosters she had killed had died over the course of three to five minutes, a period Hazel argued was not humane. They also recovered one live rooster.

Michael Gast, a veterinarian, testified that the dead birds and the live rooster were emaciated and showed signs that their muscles had wasted away. He said the dead birds’ heads were severed in a careful manner after examining them during a necropsy. 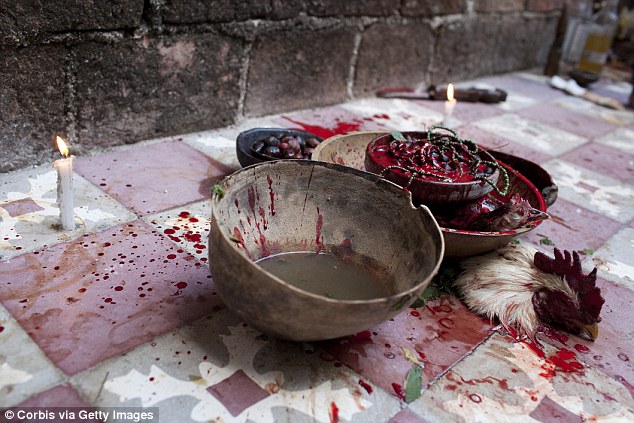 “There was an intricate cut,” Gast testified. “It would take some skill to do that.”

Gro Mambo Danthoula Novanyon Idizol, executive board secretary of the National African Religious Congress, testified for the defense that Carrion, who is originally from Ecuador, was a certified priestess in Santeria. Mercy Carrion is her given name.

Idizol said Santeria practitioners should keep animals properly, before they are slaughtered humanely, and should be disposed of in a proper fashion. She said animals are often prayed over and bathed with herbs before they are killed.

Idizol said Carrion’s handling of the animals was not inhumane.

“In this country that we live in, people do not have access to all of the things necessary in our belief systems,” Idizol testified. “If you’re asking me if this is inhumane, I don’t think so.”

When she took the stand, Carrion testified that she fed the roosters and had purchased them in the condition the officers found them. She told the judge that she had owned them for only two to three days before the slaughter.

Judge Deborah C. Welsh sentenced Carrion to a suspended jail sentence and ordered her to undergo training in how to properly sacrifice animals through a class Idizol’s group offers. Carrion and her attorney declined to comment on the outcome of the trial.

A Sterling, Virginia, woman who was convicted of severely abusing and killing chickens for religious purposes will be allowed to continue owning the animals, a judge ruled. Mercy Carrion (above) has been accused of killing at least 15 hens and roosters every week, the Loudoun Times-Mirror reports. The only major requirement she faces is that a judge wants her to complete a one-week-long course on how to properly and humanely sacrifice the animals.

When Loudoun County Animal Services (LCAS) responded to Carrion’s home on May 5, they found what looked like a horror show. The Loudon Times-Mirror said they not only found blood spatter all over the walls inside her home, but they also found a metal shield covered in blood and feathers, a human bone, a knife smothered in blood, animal heads, and other various body parts throughout the home.

The tip to the house came from an anonymous source who claims they would see Carrion, “running round the house, slamming the chickens to the wall, bludgeon them to death with a club, bury the chickens alive, burn the chickens alive and cut them from the top of the neck, down the center of the body, while still alive,” a search warrant said.

The report said chicken parts were stuck on sticks and sticking out of a vase and two decapitated roosters were stuffed in a filing cabinet. To make matters worse, a live rooster was found inside a cardboard box, covered from head to toe in feces and urine, the report notes. There was not any food or water for any live animal anywhere.

An officer detailed finding “a dish with animal parts, salt and blood in a bathroom; two cauldrons with various animal torturing devices in a closet; several bowls filled with animal blood; chicken bones in jars and candles; sacrificial religious pamphlets in a dresser drawer; animal skins; two dead roosters and a plastic container with a syringe and a powdery substance.”

Carrion was on trial for the cruel way she housed and killed all of the chickens, Alexandra Hazel, the attorney for the Commonwealth argued, not for the sacrifices themselves. In the courtroom, the report said multiple officers from the LCAS testified about the condition the birds were kept in, including a call for service less than two weeks before her arrest.

Carrion is an active member of the National African Religion Congress, (NARC), the Loudoun Times-Mirror reports. Gro Mambo Danthoula Novanyon Idizol, a member of the organization and a high priestess herself, testified Carrion is a “high priestess in Santeria.” He added that Carrion “underwent an extensive initiation process,” the report adds.

During the trial, through a translator, Carrion said she would feed “the saints” through the blood of sacrificed animals, the report notes. She continued, stating, “Elders in the church instructed me to sacrifice three roosters. It was written I was to do this.”

The Loudoun Times-Mirror reported, according to Idizol, that priestesses are required to make these sacrifices by “divine forces,” but she also added the entire process of caring for the animals, taking their lives, and getting rid of their bodies must be done in a sacred and humane manner. She said the chickens should be prayed over and bathed in herbs before they are ritually sacrificed. A deputy testified Carrion admitted to him that it took each rooster anywhere from three to five minutes to die, depending on the way they were killed.

Deputy Chief Erin Peterson said the current law requires every animal to be put down and have a quick and immediate death, which mean instantaneous unconsciousness and immediate death or anesthesia, the report adds. Judge Deborah C. Welsh decided that there was no evidence found that Carrion had attempted to anesthetize the animals before decapitating them, as is required by her own religion.

Carrion was represented by a public defender who argued that the way the animals were kept does not “trump her First Amendment rights.” Allysa Woods said her client has the right to freely practice her religion. Judge Welsh agreed, choosing not to prevent her from owning animals in the future, in order to protect her freedom of religion.

Welsh found Carrion guilty on three counts of animal cruelty and she is to serve 15 days in jail total, although that time is suspended providing she takes the required course within a year. Carrion is required to pay fines and remain on supervised probation. She also attempted to get the live rooster back, but Judge Welsh denied that request.