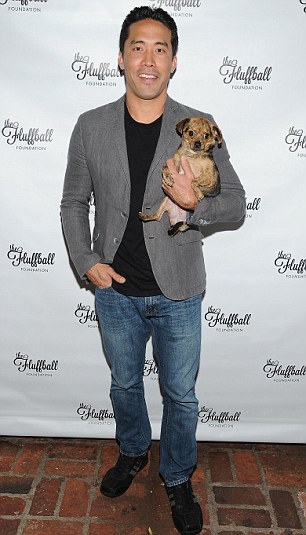 The majority of this page is taken from source George knowles/dailymail.co.uk: link to original article https://goo.gl/YQ6pqQ
When Hollywood stars including Matt Damon, Joaquin Phoenix and Minnie Driver filmed an emotional appeal to stop China’s brutal dog meat trade, horrified animal lovers from Britain and around the world rallied to the cause.
Volunteers from the UK and the US flew out to help charismatic animal crusader Marc Ching – who orchestrated the celebrity appeal – stage a daring bid to shut down slaughterhouses and rescue 1,000 dogs from the dinner table.

The animal lovers promised to find homes for the dogs in the West.

But a Mail on Sunday investigation has found that – unknown to his Hollywood backers and donors – Ching’s high-profile operation deteriorated into farce, and ended with hundreds of dogs suffering slow and excruciatingly painful deaths within days of being rescued.

He achieved cult-like status among US animal lovers after claiming to have been shot at, beaten by thugs and to have had the barrel of a machine-gun put in his mouth in a series of dog rescues in countries including China, South Korea, Cambodia, Vietnam and Indonesia.

After nine months of solo missions in which he claimed to have almost been killed a number of times, and to have rescued 300 dogs, he was ready for something more ambitious. He released his celebrity appeal days before the infamous dog festival at Yulin in southern China in June. During that event, thousands of dogs, many transported in packed cages from big cities, are killed and then eaten.

The volunteers responded to Ching’s Facebook appeal for help in what he told them would be a ‘historic’ mission to shut down slaughterhouses by paying owners and then rescuing 1,000 dogs from certain death.

In the shambolic rescue that followed, Ching’s volunteers took 300 dogs to a shelter in the city of Nanning, 130 miles from Yulin, set up by his charity the Animal Hope and Wellness Foundation. A further 700 went to Buddhist sanctuaries after Ching struck a deal with monks to buy the dogs between them.

Within days, dogs with disease and distemper began dying en masse in their cages at one of the Buddhist sanctuaries where – unknown to Ching – religious beliefs dictate that animals are denied any treatment and instead nature is allowed to take its course. 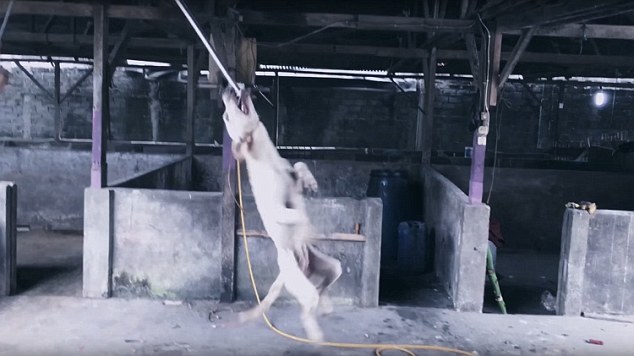 The aim was to shut down slaughterhouses and rescue 1,000 dogs from the dinner table

The chaos worsened after Ching flew back to the US and then cut off funding to the Nanning shelter after a spectacular falling out with businessman Jeffrey Beri, the man leading his volunteer team in China.

Incredibly, Ching admits hiring men described by others as local thugs to break into the Nanning shelter at night and snatch more than 100 dogs – some already lined up with adoptive homes overseas – to take to a shelter run by his supporters 500 miles away in Changsha.

Ching accused Beri of misusing funds and sexually harassing staff. Beri, who denies the allegations, says he has since spent £50,000 of his own money to stay in China to care for the surviving dogs and find them homes overseas.

Beri said: ‘The only reason I am here is to save as many of the remaining dogs that I can. When this is over, I would like a complete audit of what has been donated to and spent by [Ching’s] charity.’

The Soi Dog Foundation, run by Briton John Dalley, is paying for 70 dogs in Nanning to be sent to foster homes overseas at a cost of around £1,500 per dog. The Humane Society International has meanwhile taken in 120 dogs and is funding their export to new homes overseas. Another 90 remain in Changsha with Ching’s charity. 2. The harrowing rescue mission: A cage is packed with dogs being prepared for the slaughterhouse at the Yulin Dog Festival. Ching recruited UK volunteers to save them, saying some would be re-homed in the West

A female volunteer from the US, who gave her name only as Sarah because of abuse and threats she says she has received from some of Ching’s supporters, said the June rescue went disastrously wrong from the outset.

‘We thought the rescued dogs were all going to a safe house in Nanning,’ she said. ‘Instead, 700 of them ended up at Buddhist sanctuaries and most died because they didn’t get the care they needed.

‘If they had been left in the slaughterhouses to be hit on the head and killed, it would have been better than the suffering they went through.’

Sarah said she and other volunteers were also ordered to leave 100 rescued dogs in their cages in Nanning from 7am until 4pm in sweltering conditions so that Ching could be photographed with the animals.

Ching ordered Sarah and other volunteers to leave on June 23 but she refused and decided to stay on to care for the desperately ill dogs.

She believes between up to 700 of the 1,000 dogs originally rescued are now dead. Beri estimates around two-thirds died.
Sarah said: ‘Marc wanted everyone out so the dogs could disappear and die. He said most of the dogs were so sick they would die.

‘Marc has raised awareness of the dog meat industry but at a great cost to dogs themselves.

‘I was led to believe we were going to rescue the dogs, give them proper medical care and place them in homes. I didn’t know we were going there to pull them out of the slaughterhouse then just dump them.’

Concerns over Ching’s tactics surfaced three months before the Yulin rescue when he visited the Soi Dog Foundation in Phuket, Thailand, and took a dog with severed paws for adoption in the US. He later claimed on his website he had rescued the animal from the dog meat trade. 3. The desperate aftermath: Dying dogs at a Buddhist sanctuary where Ching’s foundation placed 700 animals. Ching did not know that the Buddhists would not help sick animals, and many of the dogs ended their days in agony
‘I told him repeatedly those dogs were not from the dog meat trade but from road accidents and cruelty cases in Phuket,’ said Dalley.

Ching blames the error on a mistake by his assistant.

Dalley suggests Ching failed to intervene when he filmed shocking scenes of cruelty used in the celebrity appeal to raise funds. His videos show dogs being hung by the neck, dogs with their paws hacked off, and a dog being strung up by the neck in a public park in Indonesia and yelping as it is blow-torched.

Dalley said: ‘In one in Indonesia you can see at the beginning a guy puts his thumbs up to him [Ching] as if to say, “Are you ready?” At the end the guy is turning around as if to say, “Was that OK?”

‘I don’t understand how anyone who professes to be in animal welfare can film that sort of thing without intervening. He could have saved those dogs.’

In a telephone interview from California, Ching admitted making mistakes with his Yulin rescue but insisted that he did not regret it. ‘All of those dogs were supposed to die,’ he said.

He admitted he ‘didn’t know the philosophy of the Buddhist monks’ and hadn’t realised the dogs sent to them would be left to die.

He estimated about a third of the dogs died and claimed that some had been distributed to local animal welfare groups to be adopted within China, explaining the disparity between his estimate on survivor numbers and those of his volunteers.

Ching insisted the celebrity appeal did not raise much money.

However, a video of him in a slaughterhouse in Yulin that was released days later raised hundreds of thousands of pounds, according to his assistant.

He said the videos on his website were filmed while he was posing as a meat trader to get into slaughterhouses and was unable to rescue dogs without blowing his cover.

Peter Li, China policy specialist of the Humane Society International, said: ‘We don’t believe buying dogs is the right approach, especially buying dogs at the festival and in great numbers. It encourages the trade. I hope what happened at Yulin this year will not happen again.’