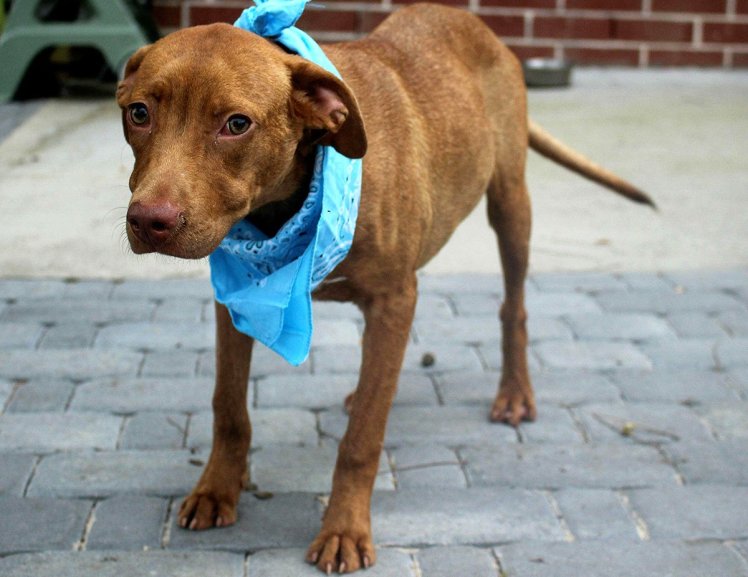 face charges after a Tennessee hound they adopted had to be euthanized due to extensive injuries.

WILMINGTON, N.C. (WECT) – A Tennessee hound adopted from the New Hanover County Sheriff’s Office’s Animal Services Unit had to be euthanized after the dog’s owners are accused of abusing it.

Charlie, a Tennessee hound adopted from the New Hanover County Sheriff’s Office’s Animal Services Unit, had to be euthanized after the dog’s owners beat the hell out of him because he went potty on the floor
On Dec. 29, 2017, Keaton Alexander Messina Miller and Joshua Ryan White, both of Wilmington, surrendered ownership of their dog, Charlie, to New Hanover County Animal Services due to the dog having some form of hip or rear leg injury.

Miller went before a judge Tuesday afternoon on felony animal abuse charges. Investigators stated that Miller told them the dog defecated on the floor and in response, Miller smacked the dog.

During intake assessment, Charlie was unable to stand on his rear legs, according to Lt. Jerry Brewer with the NHCSO.

“X-rays were taken and it revealed that both femurs were broken in half just above the knee joints and the femoral head and the ligaments were torn away from the left hip,” Brewer said. “Charlie had to be humanely euthanized due to the extent of his injuries.”

As a result of its investigation, the sheriff’s office charged Miller with a felony and misdemeanor animal cruelty for “being directly responsible for the injuries Charlie sustained.” Miller was arrested on Monday and posted an $800 bond.

On Tuesday, the judge increased his bond to $5,000. He made bond, and the judge ruled that he cannot be in contact with any animals.

White was charged with misdemeanor animal cruelty for failure to get medical care for Charlie within a reasonable amount of time.

At first sight, this might seem cute to some onlookers but if they only know how these abused dogs are tortured into submission to walk on their back hind legs with human clothes on. If you happen to see this please report the video, report it to the authorities, reprimand the makers of the video or in person.

Ever wonder how they get them to walk upright? They beat them into submission of course.  This is common practice in some Asian countries.

THIS IS WHAT YOU SEE

THIS IS HOW THEY ARE BEATEN INTO SUBMISSION TO DO WHAT THEIR OWNERS WANT THEM TO DO. THIS MOSTLY TAKES PLACE IN ASIA.