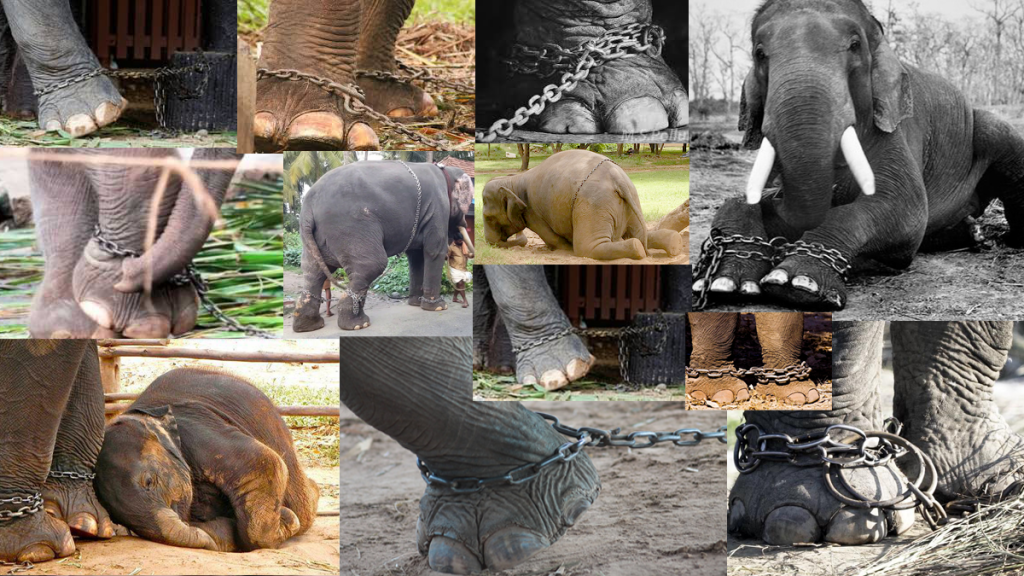 The Buddha From the Dhammapada, Verse 270

Elephant cries out in pain as he wails in agony he thrashes about the pool, while a sadist shouts and whips him.

Shocking footage has emerged which appears to show an elephant crying out in pain and being whipped at a Buddhist temple. The 15-year-old male elephant, who is called Myan Prince, is filmed lying helplessly on its side in a murky pool as his keeper beats him with sharp sticks. It appears they are trying to wash his legs, which they have chained to two trees surrounding the water. Outraged activists have posted several videos of Myan Prince in distress at the Bellanwila Temple, just south of the Sri Lankan capital, Colombo.

Myan Prince was blamed by the Sri Lankan press for killing an elderly monk at the temple in February 2018 and it is suspected the temple is abusing him in retaliation; initial reports said he pushed 77-year-old Wimalarathana Thero to the ground during his breakfast feed in the morning. But the temple denied the attack happened, saying the senior monk fell and suffered a heart attack, the Sri Lankan Sunday Observer reported at the time. Maneesha Arachchige, an activist from Rally for Animal Rights and Environment [RARE], said she fears for the elephant’s life after visiting the temple yesterday. She says ‘We are very concerned for the welfare of Myan Prince.

‘He seems to be being beaten on a regular basis and the temple seems unconcerned. ‘If action is not taken quickly we fear for the safety of those around the elephant as well as Myan Prince’s safety and wellbeing.’ A petition calling on the temple to release the elephant to a sanctuary has now been backed by more than 120,000 people. Elephants are considered sacred animals in Sri Lanka and if so sacred why are they so cruel to them? Many of the elephants become pets at Buddhist temples, which use them in annual pageants.

A monk from the temple says that the elephants are tied to a tree for two weeks as part of a Buddhist ritual. Catching wild elephants is illegal in Sri Lanka, but it’s suspected many elephants that end up in Buddhist temples are stolen by poachers who kill their mothers.

Please email the Temple Bellanwila Rajamaha Viharaya in Sri Lanka and tell them that the rest of the world intelligently know that all elephants belong in the wild with their family wimalaratanab@bellanwila.org and that they are a disgrace to all that is ethical. They will respond with an excuse but that is all it is.

When you go on vacation and want to ride an elephant please know this is what is going while you are enjoying the sights on the painful spine of a tortured elephant:

In another atrocity these savages have animal abusing parades; in the most recent one, the Sri Lanka animal abusers, who are obviously void of any and all empathy, take an emaciated, sick and weak 70-year-old elephant named Tikiiri who has live as a slave for her entire life and forced her to walk in shackles in this stupid parade for hours every night for 10 nights. To hide her emaciation they put a ridiculous costume on her and a degrading mask over her face and forced her to walk while crowds are shouting, shooting off fireworks and the sadist riding on her back is poking her with the pointed bullhook in the back of the neck. She died a few weeks after this ridiculous ceremony.

the source of the following by Cat Trudell www.thecultureist.com

“Tourists may think activities like riding an elephant do no harm,” Dr. Jan Schmidt-Burbach, the senior wildlife and veterinary adviser at London-based charity World Animal Protection, told The Dodo in 2015. “But the brutal truth is that breaking these animals’ spirits to the point that they allow humans to interact with them involves cruelty at every turn.” Schmidt-Burbach pointed out that Phajaan is a widespread method.

There are many graphic videos to prove it, like this one by Animal Activist Alliance Thailand.

An elephant’s spine is not built to support the weight of a human being. Elephants that carry tourists on their backs for hours every day experience discomfort and can suffer from permanent spinal damage. There is also the added element of the Howdah: the seat that the human sits in atop the elephant. The seat causes irritation against the elephant’s skin and can lead to infection.

Elephants are very similar to humans. They have family and friends and feel deep emotions. According to Elephant Voices, “elephants are well-known for their intelligence, close family ties, and social complexity, and they remember for years other individuals and places.” Not only do elephants remember and feel the pain of torture deeply enough to suffer from post-traumatic stress, but when elephants are brought on trekking camps, they have been ripped away from their herd and forced to live in loneliness.

“Just as we consider solitary confinement as punishment for humans, we should also be thinking that way about elephants,” said Stanford professor Caitlin O’Connell in an interview with National Geographic in 2016. “It is not healthy to house elephants by themselves.”

The Asian elephant is on the Red List of Threatened Species. According to the International Union for Conservation of Nature, the population declined more than 50 percent over the last 60 to 75 years. Asian elephants that work in the tourism industry sometimes die from hunger, dehydration, and exhaustion. Like captive elephant Sambo, who died in Cambodia earlier this year from a heart attack while giving tourists a ride in 104 degrees Fahrenheit heat. 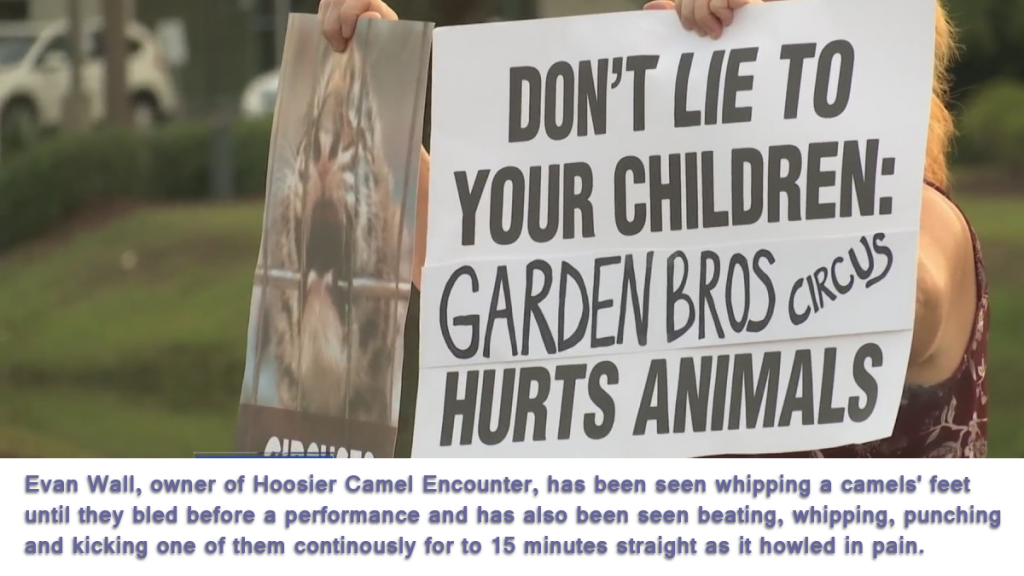 Evan Wall owner Garden Bros Circus and Cedric Walker owner of Universoul Circus are partners in Cruelty. Circuses that force animals to perform, such as UniverSoul Circus, are the cruelest shows on Earth! Animals exploited in such performances are abused and punished daily.
UniverSoul has worked for years with disgraced animal exploiters. Federal records show that a limping tiger was denied veterinary care, elephants were denied foot care, and big cats were locked in cramped cages 24/7—all while on tour with the circus. And during a 2017 inspection of the circus in Fulton County, Georgia, officers discovered wounded camels, an injured zebra, elephants with bruised feet, and an elephant with a wound on his ankle.

UniverSoul Circus does not possess an exhibitor license from the U.S. Department of Agriculture (USDA). The animal acts in its shows are leased from outside exhibitors, including many with documented histories of animal abuse and neglect, such as Mitch Kalmanson, Carson & Barnes Circus, and Larry Carden. Thanks to this shady arrangement, UniverSoul is not subject to citations under its own name. However, animal exhibitors performing with UniverSoul have repeatedly failed to meet minimum standards for the care of animals used in exhibition as established by the federal Animal Welfare Act (AWA).

The USDA has cited UniverSoul exhibitors for many violations, including failure to maintain transport vehicles properly as well as failure to provide adequate veterinary care and adequate space. Animals used in UniverSoul shows have also injured humans and other animals.

Following two dangerous tiger escapes from UniverSoul Circus, including one in which a tiger attacked an elephant, Mitch Kalmanson was ordered to pay thousands of dollars in fines and to cease and desist from violating the law. What’s more, federal records show that a limping tiger was denied veterinary care, elephants were denied foot care, and big cats were locked in cramped cages 24 hours a day, seven days a week, all while on tour with UniverSoul.

After over 100 years of cruelly forcing animals to perform in circuses is enough.
Mary was an elephant forced to perform in a traveling circus. In 1916 in a Tennesse town, an employee was riding Mary to a watering hole; the elephant went to pick up a piece of watermelon on the ground and the employee jabbed her with a sharp object; Mary reacted in pain and stepped on the employee killing him. The townspeople demanded her death!

Mary was strung up by a crane and publicly hanged to death in retaliation for the cruel mans death. It took two attempts to kill Mary. The first chain placed around her neck snapped, sending her crashing to the ground and breaking her hip. The second attempt was successful. Her broken body was buried nearby. No monument exists to commemorate Mary, just this shocking image, which serves as a haunting reminder of the circus industry’s long history of killing and abuse.

Beating animals and driving them mad for tawdry human entertainment has no place in a civilized society. While kind people hope such shameful acts of exploitation—like hanging Mary from a crane by her neck—have been relegated to the distant past, the uglier side of humanity still seeks to profit from animal abuse. One of those profiteers is UniverSoul Circus.

The complaint, which the group filed with the U.S. Department of Agriculture, asks the agency to investigate allegations that a camel was whipped on its feet until they bled and another was punched and kicked. It also alleges abuse of a llama and mistreatment of a buffalo calf.

Reached by phone, Evan Wall, co-owner of Hoosier Camel Encounter, denied the charges, saying he was blindsided by the allegations.

“To me it’s my passion, the animals are,” he said. “Anybody is welcome to come out to our farm to see how they’re taken care of and how they’re loved.”

The complaint targets Garden Bros. Circus and its animal exhibitors, including Hoosier Camel Encounter. PETA notified the media of the complaint in an email Wednesday.

PETA said a whistleblower – a former Garden Bros. employee – contacted it “to report routine abuse, neglect, and public endangerment by the circus’s manager and animal exhibitors.” Other exhibitors named in the complaint are Carson & Barnes Circus employees, Franzen Bros. Circus and Hugo Liebel.

Hoosier Camel Encounter, located south of Huntington at 1359 W. 200 S., provides camel and pony rides and a petting zoo for events such as festivals, company picnics and parties, according to its Facebook page. The PETA allegations refer to incidents in 2016 and early this year.

Richard Bell, a USDA spokesman, said the agency received the complaint and will determine if there are Animal Welfare Act non-compliances that need correcting.

A messages left for a Garden Bros. Circus representative was not immediately returned Wednesday.

PETA – People for the Ethical Treatment of Animals – said the whistleblower reported Wall whipped camels’ feet, sometimes drawing blood, before performances and once “beat, punched and kicked” one of them for up to 15 minutes as it howled in pain.

It also accused a Hoosier Camel Encounter handler of leading a buffalo calf by a rope attached to a ring in his septum, “inflicting pain with each tug of the rope.”

Wall said he had “no clue” where allegations of whipping and beating animals came from. “You don’t gain respect from an animal or trust from an animal by beating it,” he said. “For them to say I beat an animal for 15 minutes really tears at me.”

He acknowledged the buffalo’s nose ring but said the animal was led by a halter, not the ring. The USDA inspected the pet buffalo, which is still on the farm, and didn’t find a problem, Wall said.

Wall also acknowledged being cited in February by the USDA for a circus trick in which a llama is supposed to jump over a camel. The handler began hitting the llama with a whip, and the animal fell as it attempted the jump.

The handler was “eliminated from his position immediately,” Wall said. “It’s unacceptable. These animals are family. They are not there completely for us. We work together and we work on a one-on-one scale.”

PETA is out to close Garden Bros., which contracts with Hoosier Camel Encounter to travel on circus tours, Wall added.

“Their starting point is to get circuses completely shut down,” he said. “So that’s where all that is coming from.”

The following is a complaint filed against Garden Bros. Circus for animal cruelty