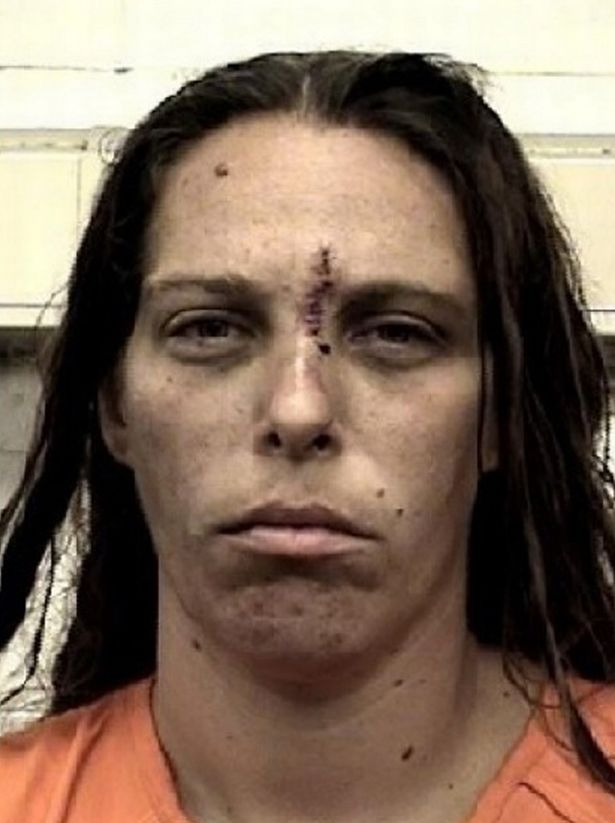 This case is almost a year old but the monsters will be going to trial in less than 4 months and; I want anyone who might be deciding the fate of these horrid monsters to have it fresh in their mind what this precious little girl, Victoria Martens, went through at hands of her own mother and the mother’s friends. Her daughter was no more than an inanimate object to monster mom Michelle Martens.

In August 2016 MONSTER Michelle Martens sat back and watched as her 10-year-old daughter Victoria was raped while she begged for mercy then killed and dismembered by her mom’s boyfriend Fabian Gonzales and his cousin, Jessica Kelley. Martens said she then had sex with Gonzales 20 minutes later. she also told police that she ‘liked watching Victoria being raped by her boyfriend and Kelley.

Forensic reports said that Victoria was raped, strangled, stabbed, dismembered and burned. Transcripts now reveal her mom Michelle, 35, initially claimed innocence; She told police her boyfriend’s cousin, Jessica Kelley, killed Victoria, but her story changed repeatedly before she admitted the truth.  The claims emerged across three interviews with police during which Martens told a series of conflicting accounts. Fabian Gonzales was guilty of the attack, Martens claimed – but the mom admitted she did nothing to help her begging daughter.
Michelle Martens admitted that she watched the pair rape Victoria on at least three other occasions in the days before she was killed and that she thinks Gonzales had been abusing her for a month while she was at work. Martens even had sex with Gonzales 20 minutes after the killing.

Michelle Martens told cops she enjoyed watching her daughter be violated and had let two other men have sex with her in the six months before the murder.  The little girl’s Autopsy showed that she had human papillomavirus (HPV) at her time of death, suggesting she had suffered sexual abuse in the months before her death.

Michelle Martens has reportedly told investigators she had offered her daughter online to pedophiles who wanted to rape her little girl.
The autopsy shows Victoria had no meth in her system, contradicting her mother’s claim that she died from an overdose of meth, which she had given to relax her. But she did have alcohol in her system. According to the criminal complaint, Gonzales raped Victoria before she was strangled and stabbed.
As Martens watched, Kelley “hold her hand over” Victoria’s mouth during the sexual assault, the complaint said. According to the document, “Michelle stated she watched this happen for sexual gratification.”

10  year old Victoria had begged them to stop as she was being tortured, according to police documents. But Martens continued to watch and did nothing while her daughter was being killed.
Gonzales also told investigators that he had sex with Victoria “shortly after the child was deceased,” according to a search warrant.

Michelle Martens told investigators that her daughter kept looking at her mom and begging them to stop while she just watched and did nothing. Michelle then told investigators that, “Jessica  was stabbing her,” and that Jessica Kelley and her cousin Fabian Gonzales started “cutting [Victoria’s] arms.” The gruesome incident occurred around 5 p.m. on Aug. 23, 2016;, according to the mother. After Victoria was killed, the three “acted like nothing ever happened,” Martens told police. She had sex with Gonzales just 20 minutes after he raped and killed Victoria; the three also cleaned up and made dinner. During his interview, Gonzales said that he had sex with Victoria “shortly after the child was deceased,” according to a search warrant.
The police transcripts also revealed chilling and disturbing details about the final month of the child’s short life. Martens said that the pair had sexually assaulted Victoria three times in the days before they allegedly strangled and stabbed her to death and that she suspected her boyfriend had perpetrated the sexual abuse of the young girl for about a month. During the interview, which lasted about eight hours, she told investigators he raped Victoria daily the month before her killing while also taking pornographic videos and photos. The pair had only been dating for about a month at the time of the homicide. Victoria had also been sexually assaulted by at least two other men as her mother watched — in the six months before her death. Michelle stated she watched this happen for sexual gratification, according to previously released court documents. Martens has been charged with kidnapping and child abuse resulting in death. Gonzales faces the same charges as well as child rape. Kelley was also charged with kidnapping, child abuse resulting in death and child rape. Their trials are expected to take place next year, according to the reports.

Victoria’s Birthday Party Day after She was Murdered