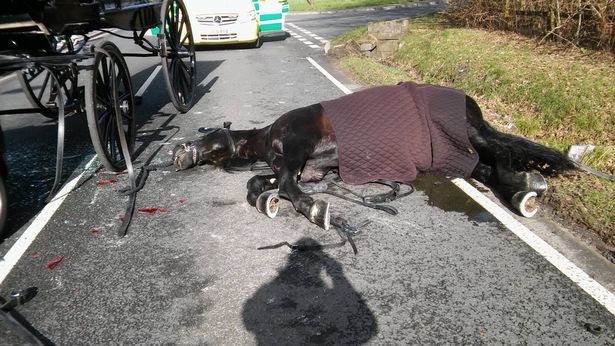 IF HORSES COULD SPEAK THEY WOULD MOST DEFINITELY TELL YOU THEY DO NOT WANT TO PULL YOUR FAT ASS THROUGH BUSY STREETS, BATTLE CARS, EXHAUST, HEAT AND IDIOTS

Every year, the list of accidents involving horse-drawn carriages grows, and horses continue to endure pain and suffering because of this outdated practice. The only way to end this cruelty is to ban it permanently and give these horses the freedom that they deserve.

Forcing horses to pull oversized loads isn’t romantic—it’s cruel. Horses are forced to toil in all weather extremes, dodge traffic, and pound the pavement all day long. These gentle animals suffer from respiratory ailments because they breathe in exhaust fumes, and they develop debilitating leg problems from walking on hard surfaces. In some cases, horses have even dropped dead from heatstroke after working in scorching summer heat and humidity.

Horses are extremely sensitive to loud noises and unexpected sounds—and busy city streets have plenty of both. Horses and people have been seriously hurt—with some injuries resulting in fatalities—when horses have become spooked and run amok.

There have also been countless incidents in which carriages have been hit by impatient or careless drivers. Accidents have occurred in nearly every city where carriage rides are allowed. 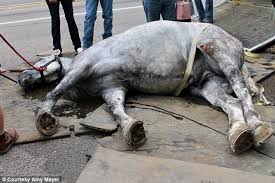 There is no way that cities, with their exhaust fumes, hard road surfaces, and busy traffic patterns can provide a humane … environment for a carriage horse.

Abused ‘Til Their Dying Day

Horses are afforded no federal protection under the Animal Welfare Act, so the responsibility of looking out for horses’ welfare falls to local animal control officials. But anti-cruelty laws provide few safeguards to horses, and many humane authorities just don’t have the resources or the time to monitor horse-drawn carriages in order to ensure that horses are not being overworked and that operators are following regulations.

When horses grow too old, tired, or ill to continue pulling heavy loads, they aren’t retired to green pastures and loving homes, as many people are led to believe. It’s cost-prohibitive to maintain a permanent sanctuary for the countless numbers of horses who break down in this industry. Instead, many worn-out horses are slaughtered and turned into food for dogs or for carnivores in zoos, or else they’re shipped overseas for human consumption.

If you live in a city where carriage rides are still allowed, contact your local legislators to ask if they will sponsor a ban. Many cities—including Biloxi, Mississippi; Camden, New Jersey; Palm Beach, Pompano Beach, Key West, and Treasure Island, Florida—have already banned horse-drawn carriages. This Florida Town Is a Dog Dumping Ground

It is a dog’s worst nightmare. They get in the car with their human for a ride thinking they’ll be going somewhere fun, probably the park or the beach, but when the car stops, the unthinkable happens. The person they trusted with their lives and who they love the most opens the car door from the inside, shoves them out and drives off. Confused, the dog runs after the vehicle as fast as he can but it’s pointless. He’s been abandoned.

Unfortunately, that heartbreaking scene is a regular occurrence in Redland, Fla., a rural community that’s become a dumping ground for unwanted dogs.

According to the local rescue group, Redlands Rock Pit Abandoned Dog Project, there are “hundreds, maybe 1,000?s of abandoned dogs roaming the area and we only cover one-third of the community.”

The animals roam around unattended, struggling to survive after spending part of their lives domesticated. Since Redland is an agricultural area with just over 10,000 residents, the terrain is also dangerous for the animals with snakes, spiders, insects and predators sharing their new habitat.

“When you think about dogs living in the wild, you think of wild dogs,” says Rick Chaboudy, executive director for the Suncoast Animal League, a Tampa Bay rescue group. “These are not wild dogs, they’re dogs living in a wild situation.”

Pictures both groups have shared of the area indeed show very friendly animals—albeit sick, clearly underfed and injured. A (heart wrenching) video released by Suncoast Animal League on its Facebook page shows dogs of all sizes and breeds next to each other sharing bowls of food that the Redlands Rock Pit Abandoned Dog Project keeps scattering around the area to keep the animals from starving to death.

“This is real and no one is doing anything for these dogs,” adds Chaboudy. “So we’re going to go down there and go really hard for three days and document it so people can see this is a real problem.”

The group is taking 19 volunteers in the over four hour drive to Redland with at least one rented cargo van, an air conditioned horse trailer and numerous SUVs. From March 24- 27 the plan is to rescue as many dogs as possible. A staging area will have veterinary technicians who will perform vaccinations, heart worm treatment and any other injury treatments (many of the dogs have been shot by locals).

Meanwhile volunteers will be in charge of bathing the animals, removing ticks from their fur and skin, and feeding them. The more experienced ones will join in the trapping and rescue mission.

The group expects to bring back between 50 and 75 dogs to Tampa Bay, which Chaboudy acknowledges will help but not solve the problem.

“If we get 50 to 75 of those dogs out, to those 50 to 75 dogs, that’s their life, it means the world to them but for the problem it’s a band-aid,” he laments. “If people continue to go and drop off dogs and do this, nothing is going to change.”

Both rescue groups are hoping their movement will generate enough awareness to get the Miami-Dade Animal Services involved. Since Redland is unincorporated, the area falls under Miami-Dade jurisdiction, but the groups say that, after concerned citizens reached out to government agency, it claimed to be unaware of the situation and therefore could not do anything about it.

Miami-Dade Animal Services did not return calls from Care2 for comment.

For those who want to help the abandoned Redland dogs, Suncoast Animal League is looking for donations to cover all the medical costs for the dogs and volunteers to help in the current and future rescue trips the group will make to the area. The March rescue mission will be documented on its Facebook Page and Chaboudy asks supporters to share the photos with their friends to bring awareness to the problem.