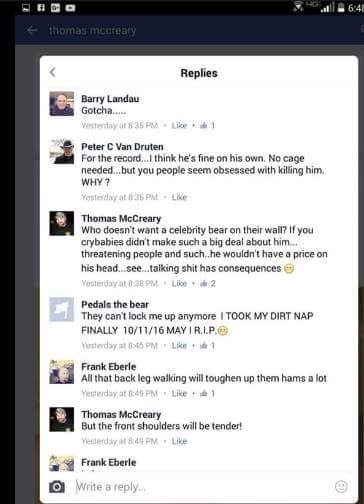 The following is a letter from Randy Decker, a former hunter,. “I hope you would consider reading one more note about that crippled bear that was just killed…? I used to be a hunter and in all my days I have never seen a more deliberately cruel act. That young bear struggled every day just to survive… he was actually doing OK for himself. He had heart and he had courage and he was quite clever. He caused no trouble, even in his condition, with the local people and he seemed to have more honor and decency to just wanted to live his life and be left alone than the Moron who took his sad little life from him. I have never seen a more cowardly selfish act of cruelty to take advantage of a crippled animal in all my days. And from the reports he was planning on “getting him” for some time. Where are the Men who have any honor anymore to tell this jerk how lame this was. I bet all his buddies pat him on the back and laugh and praise him because he upset the animal lovers. That poor, hurt bear was more than just some joke to drink beer over. He had a right to live his life and he was so slow and so easy to spot in his condition it is amazing he made it as long as he did. This fool who took his life really is “scum” No one should have gone out to get him… to target an animal because he is famous is just wrong but to go after a weak slow animal… I can’t begin to understand the mentality of this man. Not someone I would spend a second talking to. Is there no humanity left in these men who call themselves his friends? Do they not have the courage to stand up and call this fool out for what he did? I guess not. I notice these hunters today, are often all cowards and feel strong when they are together. I used to hunt in my youth, everyone I knew then had some sense of fair play and all I see today are loud ignorant children who were not taught any honor out playing with weapons that have animals so outmatched it is a joke to call hunting a “sport” anymore. Some states are allowing 8 year old children to hunt, apparently with all the postings of kids I see these days. Just how hard is it to do if a child who is in 3rd grade can do it. Just how much honor is there in a hobby when a grown man can kill a crippled animal, struggling to just survive and not be chastised for his lack of dignity by his peers? A Real Man, would let those fools know what Real Men think of things like this. Those days are gone, I am ashamed to have ever been a hunter.”